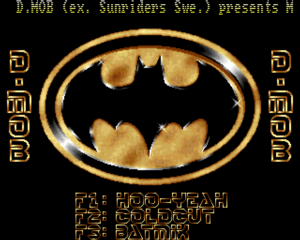 This is about as basic as they come. What you get is a scroller at the top, a picture of the Batman logo and three (four if you count the 'bonus' track) LARGE tunes, probably because they were not so much composed as sampled. Avoid this and get Music-Disk 3 instead, by much the same team... only miles better! By the way, this was D-Mob's very first production as a group.
The scroller is distorted and unreadable on my machine.
tested A1200/030-50/2mb chip, 4mb fast/3.0.

Not having a 'scene' type view to Amiga demos when I first saw this back in 1989, I have to admit to being blown away! The three tunes contain mixes of (at the time) recognisable chart music and the quality was top-notch (apart from the hissy Yazz vocal sample). With regards to the lack of flash visual effects, this demo was all about the music - but the Batlogo was very well pixeled.