The tiles klank end over end down the ramp. Catch them on the paddle, or they fall in the pit. Flip them from the paddle into the bins, matching the same-colored tiles horizontally, vertically, or diagonally. Each line of colored tiles is a Klax. When you've made a Klax, you hear a fanfare. When you complete a wave, the crowd cheers. Let a tile fall in the pit, and you hear a scream as it falls in. If you fail to complete a wave, the crowd is disappointed. Stay alive, complete the waves and don't drop any tiles!

Catch the tiles as they come to the end of the ramp on the paddle. Flip a tile into a bin by pressing the start/flip button. Pull the joystick forward to increase the speed of the closest tile as it klanks down the ramp. Push the joystick back and toss the top tile on the paddle back on the ramp and gain a little time.

To succeed in Klax, make points and also complete each wave. Create a horizontal, vertical, or diagonal row of at least three tiles (just like in tic-tac-toe) in the bins to make a Klax and make points. You receive the most points for diagonals, less for horizontals and the least for verticals. When you create a Klax, the tiles in the Klax disappear to make room for more tiles in the bins.

Each wave has a different task to be completed, which is shown on the To Go Meter. This task could be making a certain number of Klaxes or points or surviving a certain number of tiles. Complete the task before too many tiles drop in the pit and you complete the wave. When you complete a wave, you receive bonus points for the tiles remaining on the ramp, on the paddle, and any empty spaces in the bins. If you fail, you can start again at the same wave.

Klax does not have a clock for you to race against, but as your playing time increases, the tiles klank down the ramp faster and faster.

Each time you begin a wave, the To Go meter shows what kind of Klaxes or how many points you need to accumulate to complete the wave. The different types of waves are :

You see several kinds of information on the screen. These are the :

Dave Akers originally programmed this in AmigaBASIC, then ported it line-by-line to C. It was written in just a few weeks on "Escape From the Planet of the Robot Monsters" hardware.

The prototype versions have different graphics, only one background with different palettes, and uglier tiles. Tiles sometimes look wrongly placed. When you throw the tile back, it's flying much further (approx. 6 seconds instead of 1). This version has 'By MSP and DSA' on the titlescreen. 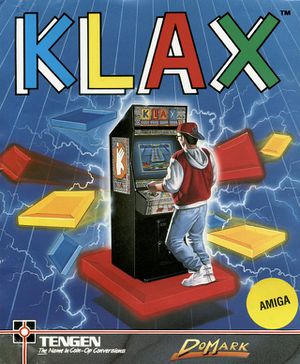 Box art for the DoMark port of Klax.