Take a seat, grasp the controls, and enter the world of the S.T.U.N. (Spread Tunnel Underground Network) Runner. Players travel ahead in time to the 21st century and experience the thrill of racing in a futuristic form of competitive driving. At the control of state-of-the-art technology, players pilot a billion-dollar vehicle capable of attaining speeds of over 900 miles per hour!

Players control their vehicles with a return-to-centre (RTC) flight controller. Control handles adjust shot elevation and include trigger buttons for firing. The start button is also used as a fire button for 'shock waves'.

S.T.U.N. runner is a game of speed. The goal of this game is to travel as fast as possible and complete each race within the allotted time. Numerous enemies prevent the player from achieving this goal. Equipped with powerful lasers, all enemies can be gunned down with the exception of one.

The race through the S.T.U.N. Network is made up of many levels. Each level presents a unique challenge to the player. The player's ultimate goal is to guide the vehicle through the network of levels to reach the 'Ultimate Challenge'. In this never-ending race, players go as far as their driving skills will take them. If the distance they travel qualifies as one of the top five, their name (18 letters) will be displayed along the road for future players to see (only if they reach this distance).

In S.T.U.N. Runner, there is no foot pedal to control speed. Faster speed is achieved by :

In turn, the fastest portion of the tunnel is the outer wall. Like a luge or bobsleigh racer, players use basic laws of physics to attain the fastest speed. Riding on the inner wall results in a slower speed and hinders a player's ability to reach a finish line. On flat sections, running into side rails creates a visual and audio chattering resulting in a loss of speed. The first race, a training race, called 'Cake Walk', is intended to teach players how to drive correctly.

Red flashing markers in tunnels and flats are called 'boosts'. By running over these, the S.T.U.N. Runner gets a boost of hyperspeed. In addition to reaching the finish line faster, a S.T.U.N. Runner in boost in invincible. The vehicle can pass through all enemy vehicles unharmed and cannot be shot. In this mode the player's vehicle will appear transparent as though it is a skeleton.

The underground network has three different tunnel sections. They include wide tunnels, narrow tunnels, and tunnels under construction. Under construction sections contain portions that are unsurfaced. These areas do not provide full power to the vehicle, and slow down the S.T.U.N. Runner.

Open areas are called 'flats' and are both narrow and wide. Being above the ground, the player is treated to many views of the earth's surface in the 21st century. On flats, players must avoid driving along the side rails. The friction caused will slow down the S.T.U.N. Runner vehicle.

A S.T.U.N. Runner vehicle has six shields for added protection. Colliding with an enemy results in the loss of one shield. At the end of each race, players are awarded bonus points for each shield remaining. A large bonus is awarded if all shields are intact.

In the tunnels and flats are ramps. These ramps will catapult S.T.U.N. Runners above the track for a brief distance. Ramp jumping is often a good method of crossing areas under construction and avoiding collisions with enemies.

When players do not reach the finish line of a race within the allotted time, the game would normally end. However, they can be allowed to advance to the next level on a continuation.

In selected races, a 'shock wave' is located along the way. If the player can pick up the shock wave, the weapon becomes available for use. Also, shock waves can be awarded on some levels if the player hits a predetermined number of stars and completes the level. This information is green in the map at the start of each level.

Players activate the shock wave by pressing the start button. This super weapon will destroy all enemies and hazards within view. It is a one-time weapon, but more than one can be stored. The number of shock waves stored is show as blue and white icons on the screen below the level number display.

Additional points can be scored along the way by running over 'stars'. In the first race, the training race called 'Cake Walk', the stars are red. Players should run over as many stars as possible. In the remainder of the game, all bonus stars are green.

These are bonus races awarded to players for reaching various points in the game. Races 5, 10, and 15 are challenge races. Each presents a unique challenge to the player:

In each challenge race, players have one goal. Instructions are displayed prior to the start of each race. The time clock still operates, but a game will not end because the time expires. This is considered a free bonus for players. Each challenge level has its own high score table.

For those players skilful and patient enough, an 'Ultimate Challenge' awaits them at the end. It is an endless race filled with enemies and unexpected surprises. The object is to travel as far as possible within the allotted time. Markers on the road display the names of the five best S.T.U.N. Runners. It is a unique method of identifying the best players of the game. These names are also presented on a separate high score table.

This game built on technology that Atari games had already used in their "Hard Drivin'" series of games. But this time Atari got it right. S.T.U.N Runner had liquid smooth polygonal graphics, voice samples, and many challenging levels.

Originally based upon an idea that Carol Cameron submitted. In her original concept there were only tunnels and you were racing against computer players as opposed to racing against the clock.

Every S.T.U.N. Runner game in the U.S. has a special built-in contest feature. A player can win a free S.T.U.N. Runner T-shirt just for playing the game. All players have to do is reach the checkpoint on the last level, the Ultimate Challenge (this contest expired April 1, 1990).

On Level 1, each red star the player's ship runs over scores 50 points.

On Level 3 and after, each green star the player's ship runs over scores 500 points.

At the end of each level, the player is awarded a bonus of 100 points per .1 second remaining on the clock.

At the end of each level after level 1, the player is awarded a bonus based on how many shields his ship has left :

When starting on level 6 (intermediate), 50,000 bonus points are awarded when the level is completed.

When starting on level 11 (advanced), 100,000 bonus points are awarded when the level is completed.

Start out at level 11 (Labyrinth) and complete it. On level 12 (Coat-hanger) go right and catch the boost and continue going right. You will fly up and then continue and cross the finish line. You will be warped to the very end of level 18, essentially placing the player on level 19.

Note : This warp is only available on 'Software version 24.0' and lower (see Update section for more information).

There is also a warp on level 9 which takes the player to level 14.

The Ancient One
Rick Moncrief 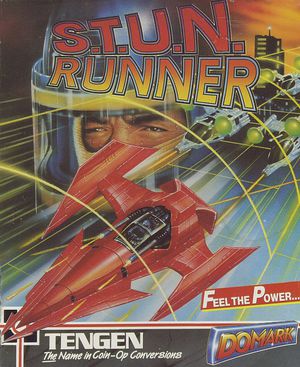 Box art for the DoMark port of S.T.U.N. Runner.