Silk Worm is an horizontally scrolling arcade video game shoot-em-up where you control either a jeep or a helicopter and travel through the enemy terrain, shooting various enemies.

When you arrive to the final enemy, around the hand pointing up of the statue there are two hidden icons. You can fire up with the jeep (or diagonal with the chopper), and you will see that your shots gets stopped by something invisible. If you keep firing, finally two new icons will appear (of course you don't have to kill the final enemy). Take this icon, and you will have a bonus. The bonus depends on your rank. If you have the Eagle rank you will earn 500,000 bonus points. If you don't have it, then you will earn 100,000 bonus points and the Eagle rank. 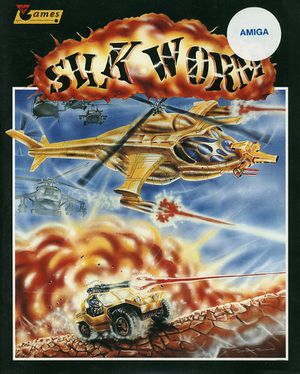 Box art for the Virgin Mastertronic port of Silk Worm.