Strider is an horizontally scrolling, platform beat-em-up arcade video game in which the player takes control of 'Strider Hiryu', a ninja-style warrior who must defeat a legendary being known as Grandmaster Meio.

Set in 2048, Meio has observed Earth from his dwelling in a far off galaxy, and has created a space station (known as 'The Third Moon') between Earth and its original moon, in order to rule Earth and continue his observation. Armed with a curved sword known as a 'Falchion', Strider must travel the globe (to locations such as the Soviet Union and the Amazonian Rain forest) to find and destroy Meio.

As well as his sword, Strider will encounter many power-ups, including robotic animals called 'Options' (a hawk and a leopard) which help him defeat enemies. He also has the ability to latch onto walls and ceilings using a metallic hook; a concept which really set the game apart from other platformers and allowed for some hugely inventive level design.

This game is known in Japan as "Strider Hiryu".

Strider became one of Capcom's biggest hits in the days before the legendary "Street Fighter II" would turn the company into one of the most important game producers of all time. This was due to the superb graphics and inventive game-play Strider offered.

Hiryuu did not have his beginnings at the Arcades, but rather at the black and white pages of a manga anthology. The original Strider Hiryuu manga was serialized between May and October 1988 issues of the Monthly Comp Comics and was illustrated by Tatsumi Wada (an alias of Strider's creator, Moto Kikaku or perhaps the other way around). Capcom was heavily involved in the production of the manga, which led to the creation to the later CPS game. The manga told the story of former Strider, Hiryuu, who retired after killing his older sister, Mariya, who went insane for some mysterious reasons. A few years since the incident, Hiryuu is forced out of retirement by Strider director Matic when he tells the news of Kain's capture by enemy forces. The Strider Hiryuu arcade game was released shortly after the manga finished it's run, although the game barely has anything to do with the plot of the manga.

As Strider was made before the fall of Communism, one could take this as a 'cold war'-era game. The main plot of the story revolves around the fact that nuclear war had broken out and a Russian secret weapon went on a rampage, the only people being able to stop it are 'Earth's Final Guardians', the Striders. Hiryu is the youngest of the Striders. Kafazu (the setting of Strider) is yet another obfuscated name (think Gotham City and New York, for you Batman fans). It's actually Kazakhstan. If you don't know where that is, it's a country in central Asia. The number of mosques in Kafazu also reflects the fact that Kazakhstan is a mainly muslim population.

Strider Hiryu was resurrected in 1998 as a character in "Marvel vs. Capcom - Clash of Super Heroes".

One of the three girls at the end of level 2 appears as a striker character (Ton-Pooh) in "Marvel vs. Capcom - Clash of Super Heroes".

On the title screen of the English language versions, Strider is written in English on top of the 'Hiryuu' Kanji. The 'Hiryuu' kanji are coloured with a purple gradient.

In the US version of Strider, Strider Hiryu is missing his yell when swinging his sword.

When you complete a level, you get the following bonus points... 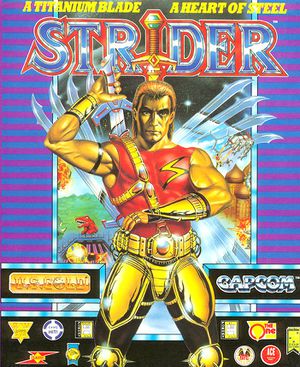 Box art for the U.S. Gold port of Strider.