U.N. Squadron is an horizontally scrolling arcade video game shoot-em-up in which the players chooses from 3 jet fighters : an A-10 Thunderbolt, an F-14 Tomcat and an F-20 Tigershark - and must battle their way through 10 enemy-packed levels (plus an extra bonus stage).

U.N. Squadron is based on the Japanese manga 'Area 88'.

If you start a 2 player game at the same time, each one will be credited 3000 dollars. On the other hand, if the second player arrives afterwards, he will have 12000 dollars (you have just gained 9000 dollars).

At the ending screen (Presented by Capcom), various little animations are shown dependent on how much Mechs were recovered, or if the Unicorn was recovered...

Unicorn (+ a shield) - Destroy all trees without forgetting from the very start of the level to destroy the 1st tree on the left. The unicorn will appear spontaneously in front of the fortress.

Yashichi - Destroy the latest turret of the fortress, Yashichi is just on the right in bottom of the fire turret.

Mech (1,000 pts) - Just behind the 5th rock, on the ground level, a Mech which agitates a flag will appear.

Mech (10,000 pts) - When the way separates in 2 ways, take the top while shooting at the base from the 1st pillar made of rock, a Mech will appear.

Mech (1,000 pts) - After the 2 boats come from the left, place yourself at the top of the screen and shoot until a Mech with a rifle falls into water.

Yashichi - At the middle of the Battleship, we have a red turret, destroy it to release Yashichi.

Mech (1,000 pts) - Behind the second building, a Mech with an umbrella hides. 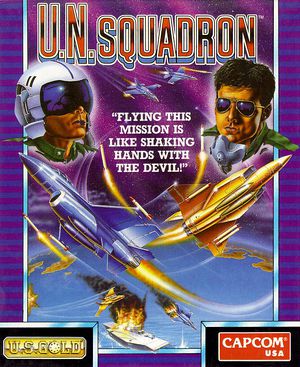 Box art for the U.S. Gold port of U.N. Squadron.