This is not "news" in the true sense, but rather a development blog we used whilst developing the site. Actually it wasn't used a great deal, but gives an idea of some of the ongoings.

Great news! The World of Spectrum is now linking to all 221 relevant arcade games in the Lost In Translation section. I just need to return the favour and add links to all those pages!

In the very near future, Steinar Lund has agreed to provide scans of his original artwork to be displayed on his own page. Looking forward to those...

BuZz is feeling ill at the moment, it seems that man-flu has finally reached Oxford! ;-)
Get well soon mate!

The arcade section has taken 9 months to put together, and is only a basic shell for this project. Only The Ninja Warriors is complete, with Out Run needing a sound section.

For those waiting for an update to his page, just to let you know that Bob Wakelin became a father again quite recently. Congratulations Bob!

"Things are gradually settling into a routine", so hopefully more artwork and more comments will resume in the near future.

Well, UnExoticA finally made it's way into the wiki. Whopping great big thanks to Kyzer for doing this - the bloke is a genius! ;-)

There are still some minor issues with the UnExoticA, such as links to HOL and Lemon - and possibly other websites.

I've been plodding along adding more crap to the Lost In Translation series, including beefing up the Out Run page with practically all the different port screenshots (and how long did that take?!?). Also, check out The Ninja Warriors as the sound section is healthily populated now.

Finished converting the E section of the Amiga Demo Groups.

Got bored waiting for BuZz to fix the ƒö®êïgñ çhârä©tèr$ in the Amiga Demo Groups, so I've started editing them manually - again!

Still no word or work from Kyzer about the port of UnExoticA.

These are dark times when only I am working on the wiki, and I, being a new father, have less spare time the anyone! 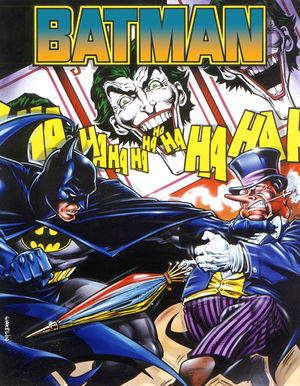 Well, I'm still helping migrate old ExoticA manually into the wiki, namely the Format and Replays section. It's a slow process, but I'm sure it's worth it. Isnt' it?

I'm very proud to announce that the artist Bob Wakelin has agreed to provide original scans of his artwork for ExoticA. As I type, there are four pieces currently on display, with new scans provided each week. Not all are relevant to the Amiga - but who cares when there's so much nostalgia (and talent) in the artwork? ;-)

I've stopped reformatting the Amiga demo stuff as BuZz is working on re-uploading the rest of the unedited groups to fix the ƒö®êïgñ çhârä©tèr$!

...and somewhere out there is Kyzer - if you see him will you give him a prod and ask him, "Are you still porting UnExoticA into the wiki?"

Did some cleaning up and added missing descriptions from some areas. Lots more to do, but once the structure is in place, it should make the site look more complete.

Well, I have been doing some stuff with the wiki, but mostly behind the scenes changes. We are currently running 1.8.2 but version 1.9 is just out, so I will be upgrading to that and making sure we have all the CSS style changes with monobook which might apply to our skin. Still waiting for Kyzer to finish off the UnExoticA bot. I hope that will happen soon. There is a ton of stuff which needs finishing off around the site, which I should be doing. I'm going to try and find some time for that. Honest ;-)

I've been active on the Amiga elsewhere however, as I made a 68k version of HivelyTracker (http://www.hivelytracker.com). HivelyTracker is a new tracker based on the AHX replayer but with more channels and some other stuff. Requires a high end Amiga (or UAE) to run.

I noticed we had a couple of edits from some visitors, which was nice, even though we are not officially launched yet :)

Finished the last of the D section of the Amiga demo groups. Will this pleasure never end? ;-)