Aminet is a set of interconnected WWW and FTP servers hosting freely distributable Amiga software. Established in 1992, Aminet belongs to the Internet's oldest software repositories, the total size of the archive has recently crossed the 30 GB barrier.

The History of Aminet

ICU, a club of swiss computer science students, uses an Amiga 3000UX donated by Commodore Switzerland to host a FTP archive at amiga.physik.unizh.ch. Urban Dominik Müller is appointed as the administrator of said archive and immediately introduces the .readme collector, the one thing that defines Aminet to this day. On January 16th, the new FTP archive is announced on comp.sys.amiga.unix.

After the most popular Amiga software archive at ab20.larc.nasa.gov is taken offline, its users are switching to other FTP servers - many of them to amiga.physik. The server is unable to handle the increased traffic, that's why Swedish Amiga user Peter Sjostrom establishes the first mirror at ftp.ludd.luth.se. More and more mirrors are added, in December 1992 the regular announcements posted to Usenet already list 8 international mirrors.

The term 'Aminet' is used for the first time to refer to amiga.physik and its assorted mirrors.

The first Aminet CD-ROM is released.

The main server generates too much traffic and has to go offline.

Chris Myers from Washington University provides an account and sufficient disk space at wuarchive.wustl.edu, which becomes the new home of Aminet for more than a decade. 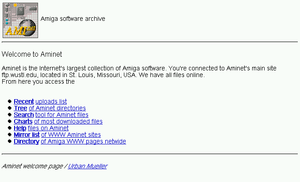 The Aminet-On-Disk service is introduced. Users without internet access can now order single Aminet files, per-directory subscriptions or a whole month of Aminet uploads on floppy disks or similar media.

Aminet goes WWW: The first web interface for Aminet goes online at ftp.wustl.edu/~aminet/. The logo was chosen by Aminet users from all submissions to the Aminet logo contest.

Starting with Aminet CD 8, CDs are now released bimonthly. About 100 MB of new software gets uploaded to Aminet each month.

Aminet hits 30,000 files and is now regarded as the the world's largest collection of freely distributable software - for any computer system.

Aminet's most successful year comes to an end: from January to December 1997, more than 12,300 packages have been uploaded.

Due to continued file system troubles on wustl.edu, the Aminet main site moves to ftp.uni-paderborn.de, a mirror maintained by co-admin Matthias Scheler.

The harddisk of the German main server dies, so Aminet moves back to wustl.edu.

Richard Small from Aminet's distributor GTI announces that Aminet CD 52 will be the last in the series.

wuarchive.wustl.edu, the server hosting the main Aminet mirror, has hardware problems and goes offline. As all uploads are processed on this server, Aminet does not accept new uploads for now.

wuarchive.wustl.edu is back online. Unfortunately, the backups used to restore the Aminet account are old and incomplete: Uploads are still not working. 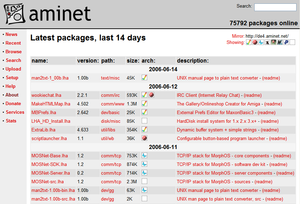 Urban Müller establishes a new main server at ch.aminet.net. Aminet uses a completely new Web interface now, written by Nicolas Mendoza. The main server is accepting uploads again, though the mirrors are not updated yet. Several new administrators are taken on board. Matthias Scheler, Aminet co-admin for more than ten years, leaves the Aminet team.

The Aminet mirrors are back online.