It has since had numerous amendments, up to and including the final v2.03β, which is now available for free.

Although work on EaglePlayer ceased in 1998, the authors have kindly allowed the source code to be made open source in 2004. 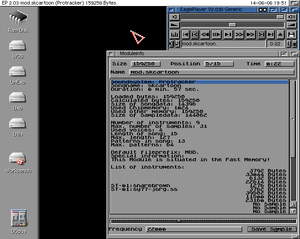 (Taken from the EaglePlayer documentation)

The Eagleplayer is a program package for replaying music of different soundformats in a very comfortable way. It CANNOT be used for creating music, therefore it should not be mistaken for a musiceditor, sequencer, tracker and so on. Internally, it consists of replayers for Sound/Noise/Protracker, Startrekker(AM) & Audiosculpture(AM), other Protracker-Packers and a special Customplayer-Port, yet. But it can also reload other needed external players. The advantage of this method is clear: Only the needed players have to be loaded, which saves loading time and memory. Besides, the length of the mainprogram doesn't reach infinity. All the internal SoundTrackerRePlayers support Song-Loading (except Protracker-Packers). Songs and samples can be in crunched state. The instruments-path can be changed with the configuration-file. Packed samples are allowed. They will be loaded as RAW-data. 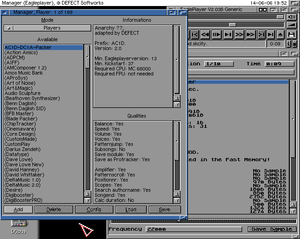 (Taken from the EaglePlayer documentation)

The following players are bundled with EaglePlayer, though it doesn't mention which are internal and external.

Although the last release of EaglePlayer was in 1998, new players are still being written for it - the bulk of which are by the Wanted Team.