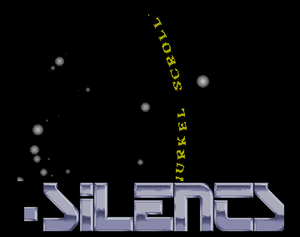 Winner of the Spectre & North Star Helloween Party '89 demo competition!
Not very advanced, with just a logo in the wellknown 'Psygnosis' style, and a wireframe vector scroller that twists and turns in every direction. Not very inspiring, most interesting for the people who worked on it - most of what would later be Digital Illusions ;D A preview of this demo won the demo competition at the the Helloween Party '89 in Trollhättan, Sweden. Also known as 'Magic Dimension Scroll'.
tested A1200/030-50/2mb chip, 16mb fast/3.0 -- Note: Needs KillAGA! 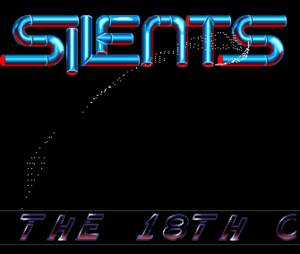 This is a very well presented little demo (well, more of an intro really...) This is mainly due to some excellent visuals by Mikael Balle, which were incidentally also used in their "Megademo"! The demo itself focuses on a dotscroll (a new idea by Mr.Perfect they claim...was this the very first dotscroller?) with the usual twists and turns. The obligatory logo at the top of the screen changes between 5 images; SILENTS - MR PERFECT - MIKAEL BALLE - JESPER KYD and a Batman logo :) Nice.
tested A1200/030-50/2mb chip, 16mb fast/3.1. 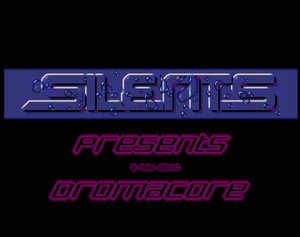 This ancient megademo is a true treasure! Everything is top-notch about this one; from the graphics to the FABULOUS music to the code... For its time, I guess this must have been pretty much state-of-the-art! If nothing else, get this for Kyd's music in the Dromacore part...
tested A1200/030-50/2mb chip, 4mb fast/3.0. Note: Cache off. 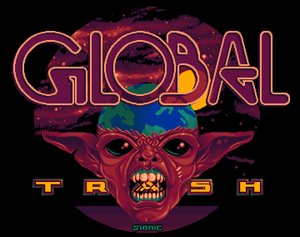 This demo is legendary, and rightly so. Sunjohn's first (and as far as I know, only) TSL demo creates a mood not unlike Kyd and Balle's masterpiece "Hardwired", released at the end of the year. Jesper Kyd's music plays a big part in that, and the idea to have music playing almost instantly after you insert the disk is a very good one. Being used to things loading for a while, you're actually startled when you insert this and it starts right away! So, what's the star feature of GT? The code? The graphics? The music? The answer is a combination. First things first; the code here consists mostly of nicely executed vector routines (and animation replayers ;), most of which are pretty good. The vectors here are perhaps not revolutionary, but at least Sunjohn brought in some new elements, like the flashing sections which hadn't been seen before. The graphics are also good, with nice design, great raytraced animations and a fabulous fullscreen logo by Sionic. And I believe I mentioned the music above? Sionic remains something of a mystery. He came out of nowhere (a 'new' member, as mentioned in the demo) with the fabulous fullscreen logo in this demo, only to never be heard from again as far as I know. Weird. The intro and end music is in normal ProTracker format, while the main tune is packed with NoisePacker...
tested A1200/030-50/2mb chip, 16mb fast/3.0. Note: Caches off, chipset original. 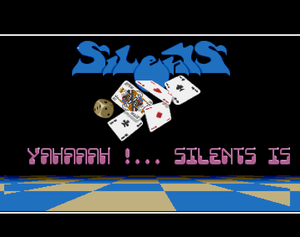 This demo is actually a first class example of the old 'text screen - effect - text screen' formula, but retains qualities that set it apart from most others in this genre. Being a demo from 1991, it's hardly surprising that the effects are of the 'filled vector object' variety. Having said that, these are among the best filled/glenz objects on the Amiga as far as pure smoothness goes. What takes this from an average example of an extinct demo type to a great one, is the quality of the material. Walt's logos and fonts are quite outstanding, and are way ahead of their time. Both of these logos deserve places in the 'demoscene logo hall of fame', if such a thing is ever invented :) The music is a nice, smooth affair but ultimately quite forgettable. Get this for the outstanding graphics and design. This was probably the French sections' last demo before "Goodbye", which followed in december.
tested A1200/030-50/2mb chip, 4mb fast/3.0. Note: KillAGA!. 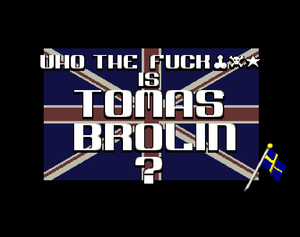 Not much to shout about, everything about "Enjoy" is definitely middle-of-the road. There's simply nothing to GET EXCITED about here, and therefore the demo leaves you WITHOUT wanting more :) Not good. Remarkably, it works without a glitch (except for some music hiccups) on the 030, indicating a clean programming style on Rayban's part. It's a pity that's the only thing to recommend the demo :( This was definitely released AFTER "Static Chaos", since the demo is mentioned within.
tested A1200/030-50/2mb chip, 4mb fast/3.0.

The 'hidden' game part, Poo-Poo Dreams, is a snake clone with GREAT music by Terrax/Palace. It's not that secret, though, since they mention how to access it both in the bootblock AND in the endpart scroller.
tested A1200/030-50/2mb chip, 4mb fast/3.0. Note: Some minor gfx errors, and the endpart music bugs. 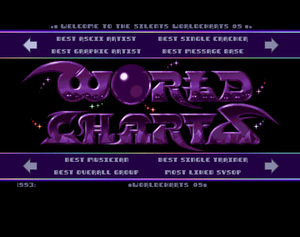 This was the first release of 'WC' for The Silents, and the second issue I ever saw. This edition does not differ much at all from issue #6, released for Scoopex. The code does not seem significantly changed, and most of the graphics are the same, save for a new Silents logo by Angeldawn. There are now a staggering 7 chiptunes to choose from, of which the default one seems to be the best. It does borrow some chords and melodies from Jarre, though... Not much more to say, really. A nice, professional release aimed at the crack/train/trade section of the scene. Works shamelessly well, and without a single hiccup on my machine.
tested A1200/030-50/2mb chip, 16mb fast/3.1.

Works ONLY on standard A1200's, but mentions a fixed version will be released later. Don't know if it ever was... The picture by Dize was also entered into the gfx competition under the name "Selfportrait". They mention that Fruitkitchen will be next in the Kitchen series.
tested A1200/020-14/2mb chip/3.0.

Fruitkitchen is certainly one of the best demos TSL have delivered in recent years! It's absolutely brimming with goodlooking effects and nice graphics. And don't even get me started on Scortia's excellent soundtrack! It opens with some pretty impressive green tinted voxels, where there are some objects added to the landscape here and there. Overlaid on this we're given the credits. The next effect is almost the most impressive one in the entire demo - it's a vector cube with a difference! Imagine the cube as the disco ball from Andromeda's "Nexus 7" with lights shooting out of every side, and all the sides have animated, spinning eye textures mapped onto them! Add this to the fact that the cube is spinning and in and out of the screen, and you've got yourself a showstopper! Just amazing. The next effect's not much worse, with us flying through streets a night, and with really realistic looking street lights shining at us. Then, when you're in heaven and think things can't get any better, a fast doom routine appears! This one's got everything expcept height, and looks really good for 1995! Next up are some vector objects, each one disintegrating to reaveal another inside, before we're shown three gouraud shaded objects mirrored onto a solid graphic sphere. We end up with a standard vector routine, with many objects moving around independently. Together with great graphics and music, this is a truly great demo if ever I saw one. It's great to see The Silents back in shape! The demo is subtitled 'A Journey Into The Banana Incident'. They mention that Blood Kitchen will be next in the Kitchen series, but as far as I know that never materialized. The last ever TSL demo?
tested A1200/030-50/2mb chip, 4mb fast/3.0. A1200/030-50/2mb chip, 16mb fast/3.0.