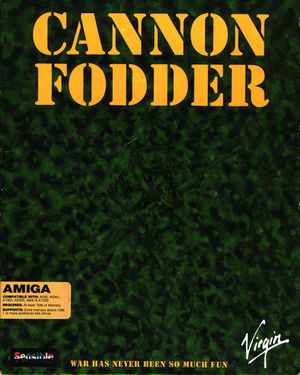 Julian Jameson (the programmer behind Cannon Fodder) asked Richard Joseph to sell his personal copy of the game on his behalf on eBay. In November of 2004, an auction was placed by Richard Joseph for a 'Very Very Special Collectors Copy of Cannon Fodder'. The item was bought by Dlfrsilver and he has provided some information about the purchase here. We hope at some point in the future - once Dlfrsilver's bank account has recovered - that he might share some of the material, so that others may enjoy and learn more about Richard Joseph and his work. Sadly, Richard Joseph passed away on the 4th March 2007, after a battle with cancer.

Items In The Collection 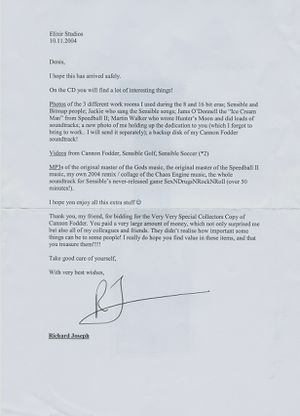 Scan of letter from Richard Joseph. 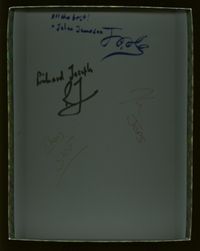 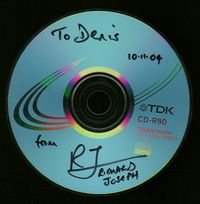 Scan of CD from Richard Joseph.
“
This CD contains many things, personal photos of bitmap eras, sensible era when cannon fodder was made, pictures of Jackie Read, the cute girl singing in sensible soccer 2006 (hehe ;)), videos of cannon fodder, sensible soccer, sensible golf, MP3 of the original masters of speedball 2 and Gods (unavailable to the public), chaos engine remix 2004 (i got it 3 years before it lands on immortal 3 CD ;)), all Richard home studio pictures, a scan of cannon fodder amiga disk intro music, a private picture of Jams O' Donnell, the guy shouting Ice Cream in Speedball 2, a picture of Martin Walker (Mr Irem sound conversion for activision, worked on Dragon Breed, R-type2, and atomic robokid) with his wife and their royal poodles, the full soundtrack of Sex Drug'n'Rock roll, and a personal dedicated photo done by Richard for me.
” - Dlfrsilver 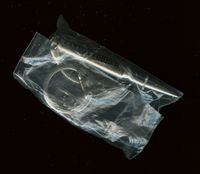 Scan of a bullet!
“
This bullet was given with every collector version of Cannon Fodder.
” - Dlfrsilver 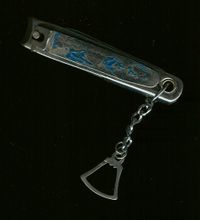 Scan of nail cutter!
“
Yay folks, the one and only one nailcuttaaa from sensi peeps :D can't wait cloning to be operational lool .
” - Dlfrsilver