Not all the games we played at home were original ideas designed for the home computer, console or handheld. In fact, a large amount of games were actually licensed versions of arcade originals or were inspired by other licensed sources such as literature, film, television or real people and events.

Some were just blatant rip-offs!

The aim of this section is to show both visually and audibly how well the games survived the conversion process from their original medium.

As a bonus, it’s also a very good resource for arcade soundtracks!

Contributing and Helping Out

There is always plenty of work to be done on the ExoticA wiki, this new section is no exception! If you fancy chipping in by submitting screen shots, detailing information about the games, contributing music or other relevant information then by all means get stuck in! Any help you could provide would be greatly appreciated.

Before you upload or insert any images, please take a few minutes to read through the Frequently Asked Questions page, which outlines a few things to take note of. 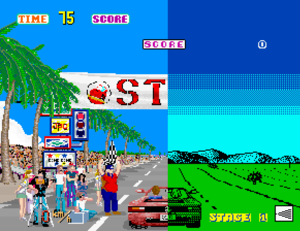 Arcade version of Out Run combined with the Spectrum version

Without the luxury of emulation during the 70s, 80s and early 90s, arcade games had to be manually ported for home use. Sprites had to be re-drawn, sound effects and musical scores had to be recreated and, most importantly, the game logic and level design had to be reproduced - all to make the conversion recognisable.

Most early computers and consoles didn't have the video and sound capabilities to recreate an exact match. This section compares how games survived the conversion process.

These days, the more powerful consoles and computers are able to run pixel (and polygon) perfect versions of arcade originals, typically through emulation. Although not as interesting to compare with the original, it is still useful to see how, when and where these arcade classics were ported for home use.

This section will feature Hollywood blockbuster tie-ins that were condensed into games.

This section will show how comic strip characters were brought to life in the gaming world.

This section will show how Hollywood cashed-in on the gaming world, turning pixels and polygons into real people and places!

Game To Film To Game

It's true! A game influences a Hollywood movie, which in turn influences another game to be made based on the movie! There are only a small handful of games, but they’re worth a mention.

This section will highlight games that originated solely on one platform and became popular enough to be ported to other platforms, including the arcade!