Forming in 1991 under the name Cellar 4 only to change their name a few months later to Urban Shakedown they were responsible for several highly successful jungle rave tunes including 'Some Justice', 'Bass Shake', 'Fire' and 'Arsonist'. Their basic production equipment consisted of two Amiga 500s, a Technosound sampler and a pair of DJ mixers, on the software side they used Audiomaster II for sampling and Teijo Kinnunen's MED 3.0 for the actual tracking preferring it over OctaMED for reasons of audio quality. Since their tunes required more than the four channels provided by MED it was necessary to synchronise the audio output of the two Amigas, they did this by adding dummy patterns filled with metronome style clicks to the beginning of each tune that and manually adjusted the second Amiga so that both were in time. 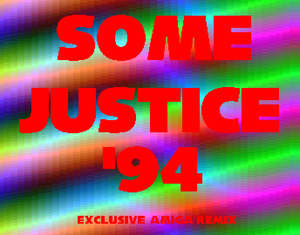 Info
Contrary to popular belief Urban Shakedown were not directly responsible for this demo, the claim that it was a promotional tie-in for a remix of Some Justice is a possibility as there was a remix given to certain high profile DJs in 1994 which is very similar to the version in this demo. The most likely scenario is that Some Justice '94 was intended as a demonstration of Peter van Campen's VideoTracker which was used by Tony Horgan to assemble the visual effects. At the time Horgan was working for CU Amiga magazine which published VideoTracker on it's coverdisks in June 1994 and November 1994, Horgan was also the author of a series of tutorials for the program starting with the December 1994 issue. There are at least two versions of this demo targetting slightly different system specifications the first is for stock Amiga 1200s while the second requires a minimum 3MB of RAM and a 68030 accelerator to run correctly.

The following demos in the UnExoticA collection were created by Urban Shakedown.