Full animated version of an intro logo made for ExoticA in 1999 by XtC, to coincide with the release of Episode 1. Yes, XtC is a Star Wars fan :)

Advert mutilation and artistically 'boinged' by XtC. The original animation was created by Eric Schwartz for the Amiga. 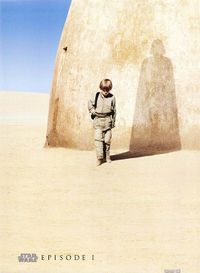 Teaser poster for Star Wars Episode I - The Phantom Menace.
“
I'm obsessed with Star Wars, I'm proud to admit it!

When the first of new poster artwork showed itself on the Star Wars website the idea hit me instantly! I had to create a Star Wars themed ExoticA logo, but it had to be relevant to the Amiga before I would even consider showing it to BuZz - so what was I to do...?

I've always been a fan of Eric Schwartz' work and I remembered his Amy vs Walker animation - I wanted to use it, but not without his permission. I explained my mad idea to Eric in an e-mail seeking his permission - and Eric said yes!

So, after a long process of removing Eric's original background from this animation, I then had to tweak the animation itself to make it fit within the boundaries created by the new logo. That's why the AT-AT appears to fly after it leaps towards the boinged Lars' home. Ahem.

My original idea was to make Anakin's shadow resemble the Windoze logo, but I chickened out and redrew Darth Vader!

I used Personal Paint, Photogenics and ImageFX for this logo.
” - XtC