A Superbly playable and addicitive platform game, with gameplay that gives more than a passing nod to Namco's seminal "Pac-Man".

The object of the game is to collect all of the bombs on each level, before progressing to the next. Extra point bonuses are awarded for collecting bombs with their fuses lit. Only one bomb at a time has a lit fuse, and collecting twenty or more of these lit bombs on any given level will earn the player a points bonus. Bomb Jack is pursued around each level by a variety of constantly spawning, mechanical enemies. When Bomb Jack gets killed, he drops to the nearest platform, always landing on his head.

The five different background pictures that feature in the game are the Sphinx and Great Pyramid in Cairo, the Akropolis in Greece, Castle Neuschwanstein in Bavaria, skyscrapers and a cityscape by night. While the five backgrounds themselves are repeated as the player progresses, the platform layouts for each level are completely different. At least until level eighteen, after which the levels repeat themselves.

A powerball appears at semi-regular intervals and moves diagonally around the screen. If the player manages to grab this, all of the level's monsters are frozen for several seconds and can then be killed by having Bomb Jack fly into them (similar to the 'Powerpill' feature in "Pac-Man"). Collecting the Bonus 'B' symbols will increase the amount of points awarded for collecting bombs with their fuses lit. Picking up an 'Extra' symbol awards the player with an additional life, while catching the 'Special' symbol will give the player an extra credit.

Released in October 1984, the original idea for Bomb Jack was conceived by Michitaka Tsuruta, lead designer for Guzzler and Solomon's Key, under the supervision of Kazutoshi Ueda, the genius behind Mr. Do!, Lady Bug and other Universal coin-ops.

Curiously enough, the infamous Sphinx in the opening round was not rendered by the graphic designer of the game, but by Ekiko, the sound designer. Tsuruta-san recalls how roles in Japanese development teams were quite interchangeable, in those early years.

Round 1 music is the ending song from the Japanese animated cartoon series 'Spoon Oba-san', sung by the ultra-popular Mari Ijima (Lynn Minmay's voice in Macross). The anime was aired in 1983... at that time, Bomb Jack development was just starting - something more than a coincidence, then.

Round 2 features the music of 'Lady Madonna', by The Beatles. Tsuruta-san, recalls that rights were paid for the licensed music at the time; still, later ports (PS2 and XBOX) come with a replaced soundtrack (mostly the Vs. Mighty Bomb Jack score).

"Bomb Jack II" has nothing really to do with Tekhan or Tecmo : it was developed by British Elite Systems for European home computers only, in an attempt to follow the huge success of the Bomb Jack coin-op conversion. They basically bought the license for the name, and then proceeded to create a mediocre maze game.

So of course, you'll want to try to get 23 each time (This is of course, VERY difficult!). The (P)ower coin appears after every ninth bomb is collected. The points value of the (P) coin ranges from 100 (Blue) to 2,000 (Silver). Since the color changes each time BJ jumps, you can control the bonus level by making small jumps until the coin turns silver. 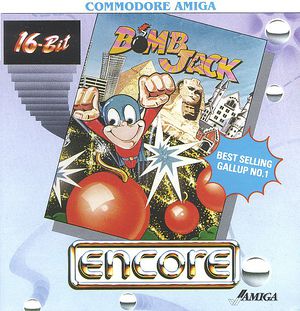 Box art for the Encore re-release port of Bomb Jack. 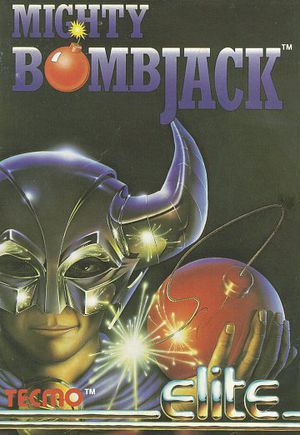 Box art for the Elite tie-in of Mighty Bomb Jack. 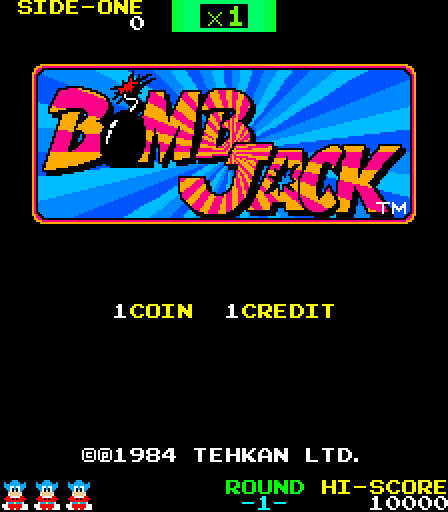 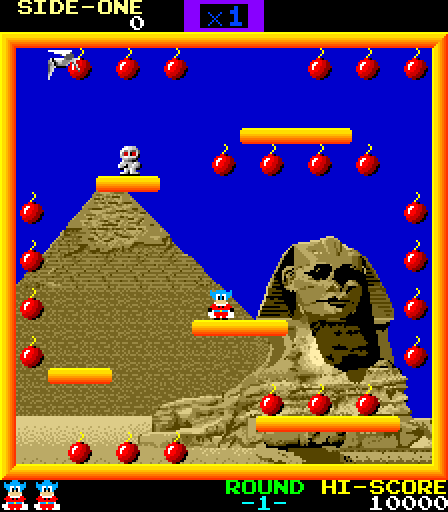