In it's 17 month development period it has had numerous amendments, up to and including the final v1.32.

Work ceased on MultiPlayer in 1992. 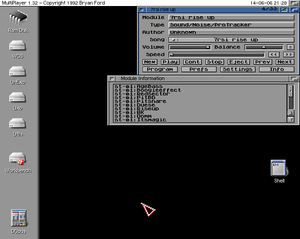 With it's XMOD, AMOD and GMOD formats, it was the first to pioneer a method that would later become know as the Custom format on DeliTracker.

Probably the only player in existence to support sequenced IFF-8SVX samples, as created by Audiomaster III or greater.

(Taken from the MultiPlayer documentation)