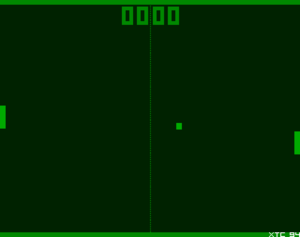 Wayne's World Pong was a state-of-the-art two player only Pong clone written in AMOS by the 'programming genius' that is XtC. The only link to the actual film are a large collection of sound samples and a couple of digitsed pictures!

The project began early 1994, when a work colleague lent XtC an Amiga public domain Pong clone (not sure which) that was on a magazine coverdisk. XtC played it and claimed he could do better than that, and started work on writing his own Pong clone later that evening. A couple of days later he presented it to his work colleague to try out. Both she and her partner liked it, but a simple Pong clone wasn't enough for XtC!

Although XtC had seen the Wayne's World movie when it was originally released in cinemas in 1992, it wasn't to subliminally inspire him until later in 1993, when he purchased it on the amazingly crystal clear and not blurred at all VHS format. With phrases such as "Game on!" and "He shoots, he scores!" it wasn't hard to understand why XtC chose this movie for the speech!

So XtC began to watch the film again and made a list of useful quotes ready for when he would eventually sample them using his trusty old AudioMaster software.

The game was developed on an unexpanded A1200, which meant XtC had 2MB of Chip RAM to play with. By doing this, it possibly meant the game wasn't compatible with Amigas that had less than 2MB Chip RAM, but XtC was callous and didn't care. This is also the reason why some people thought that the game was AGA-only - which it isn't. I mean really, does it look like an AGA-only game?

Sampling the speech from the film was the easy part - getting them all to fit on one floppy disk was the hard part. The finished game contains 664,706 bytes of sampled speech! Each of the 28 samples was carefully resampled to the lowest frequency possible without making them sound too awful.

So proud was XtC, that he even incorporated a 'sound test' section!

All the artwork used in the game was created by XtC using Deluxe Paint and a PD HAM manipulation tool.

The classic version of AMOS didn't support more than one mouse, so XtC had to find a way to let the second player use either a joystick or the keyboard so they could compete against player one's mouse. To control the speed of the bat, player two would have to press a fire button - a novel feature that seemed like a good at the time!

XtC's friends and work colleagues liked the game, it helped that they also liked the film. XtC was a happy camper!

This euphoria encouraged XtC to submit the game to public domain specialists 17BIT Software who replied using a generic printed letter with a hand-written comment saying,

“
The sound effects are great! They had us in hysterics while we were playing it - schwing!
” - 17BIT

They included it in their extensive library as: -

“
2989 WAYNES WORLD PONG
The only thing has got to do with Waynes World is the absolutely amazing quality samples accompanying the game. Basically its just a bat and ball game. But get to the sound test and there are TONS of extracts from the movie, and they all read from RAM too.
” - 17BIT 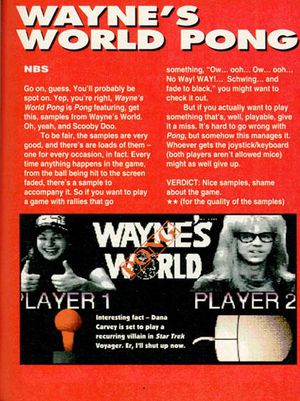 A lousy 2/5 stars from a reviewer who was showing their ignorance: - 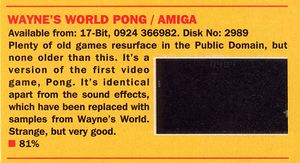 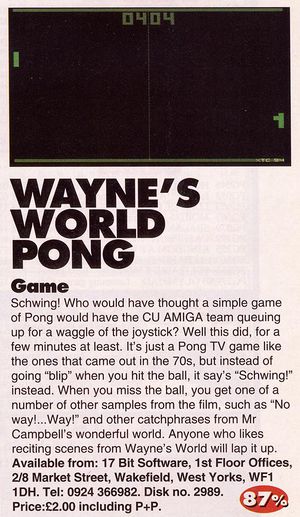 Download archive Game/Skelly_Jason/Waynes_World_Pong.lha
Also included are all the ingame speech samples, which are also in IFF-8SVX format.