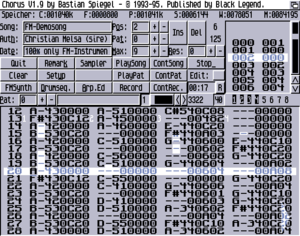 4/8 Voices. Protracker compatible and extended. Sampled and synth instruments. Modules can be saved as .exe, with replay in front of data, or alone. readme.

The tracker started as a shareware software. It sold around 140 copies until Black Legend Software became interested in publishing it. A demo version was spread on Aminet under the name "Chorus" which was also the name under which the tracker was reviewed in the german "Amiga Magazin". However, a contract with Black Legend has never been signed and the tracker became freeware. The official name of the tracker is "Art of Noise".

The motivation for this tracker was to create a soundtracker like tool that was more suited for synthetic "C64-like" songs. While keeping the traditional "4 bytes per step" size of the traditional sound-/protracker, AON managed to squeeze in more effects (62 but only 42 were used) and more instrument numbers (62). It also offered the possibility to combine any "player-effect" with one of 16 programmable arpeggio patterns. Instruments and waveforms were separated; i.e. it was possible to use the same waveform (possibly with different offset/loop parameters) in any number of instruments. The waveform could either be played "as-is" ("sample 8bit") or be split into individually looped fragments ("wavetable synthesis 8bit") which allowed for long filter sweeps or C64-like pulsewidth modulated strings. An ADSR envelope could be assigned to each instrument as well as a vibrato effect (waveform/speed/delay). The tracker was able to import soundtracker and protracker modules (and replay them perfectly). The software also featured a waveform editor which supported parallel port samplers. An 8 channel mode was added in later versions of the program; this mode required a MC68020 CPU.

The amiga installer was written by Gerd Feldkirch (Dsn/Lego). Dsn also composed a couple of modules that were included with AON. Thomas Jaenicke (Tommy/Avena) wrote tutorials for the drum sequencer and the FM synth. He, along with DSN, has been a beta tester since the early days and has composed a bunch of memorable modules. Christian Melsa (Sire/Lego), who also contributed a couple of tunes, insisted on adding an 8 channel mode; without him it would probably not have been there. Manfred Linzner (Pink/Abyss) also contributed some very nice chipmusic songs. 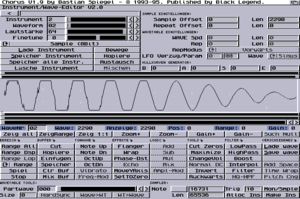