The Deep lets you control one or two boats floating along the high seas. The boats are armed with depth charges for dropping on the aquatic wildlife and submarines in the depth far below. Homing torpedoes, Polaris missiles, mines, Stingray style vessels and other boat-wrecking hazards make up the threats to avoid or destroy. Bonus capsules which float up to the surface boost the boat's speed, increase depth charge power, give the player temporary invincibility and other normal features but of a marine vein. The depth charges take their time to float to their target so plan ahead using the map, submarines at different heights in the water pose further problems. This game also has good BGs.

This game is known outside Japan as "Run Deep". 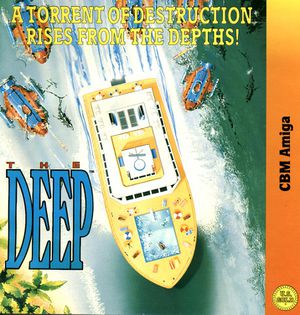 Box art for the U.S. Gold port of The Deep.