Lost In Translation/APB - All Points Bulletin

APB (or All-points Bulletin) is an overhead-view driving arcade video game in which players take on the role of policeman 'Officer Bob' as he takes to his patrol car and drives the streets in pursuit of lawbreakers. The object of the game is to meet (or preferably exceed) the daily quota of 'busts', as he tries to catch a variety of law-breakers.

Along the way, players must refuel their patrol car (by driving through filling stations) as well as meeting targets within a set time limit. Any accidental collisions or running over of pedestrians will result in the player earning 'de-merits', while a 'perfect day' will earn bonuses, with further bonuses awarded for each arrest made that exceeds the daily quota. Picking up donuts extends the time limit for a day.

APB was Dave Theurer's last game at Atari Games. He went on to work on the 'DeBabelizer' for Macromedia with other Atari alumni. Other games by Dave include "Missile Command", "Tempest" and "I, Robot".

The game enjoyed moderate success in the marketplace, as most Atari games did. It's high-resolution graphics and novel cabinet design, with the flashing lights atop, added to it's initial appeal. 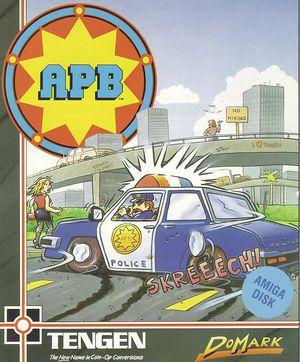 Box art for the DoMark port of APB.