Lost In Translation/Bad Dudes vs. Dragonninja

Bad Dudes vs. Dragonninja is a 1- or 2-player sideways scrolling platform beat'em up featuring the 'Bad Dudes', 2 government agents who must fight against the Dragon Ninja and his minions in order to save the President of the USA - at this time, Ronald Reagan. At the end of each level, players must defeat end-of-level bosses, one of which is Karnov himself.

This game is known in Japan as "Dragonninja".

'Bad Dudes' acquired something of a cult status, due in no small part to its tongue-in-cheek humour; such as the game's introduction by a Secret Service agent informing the player that 'President Ronnie has been kidnapped by the Ninjas. Are you a bad enough dude to rescue Ronnie?' After saving the President, Reagan appears in the Oval Office and delivers the line : 'Hey Dudes Thanks, for rescuing me, let's go for a burger...'.

The game includes a cameo appearance by "Karnov" (a hero in his own Data East game), who oddly enough, appears as an enemy boss rather than the good guy this time around!

The trucks on the second stage say 'Kikuchi Co., Ltd'. Kikuchi Co is a real company established on November 1953 in Japan. It manufactures and sells automobile body frame components and it is affiliated to Honda.

The Japanese version, "Dragonninja", has a different ending sequence to that of the US version. 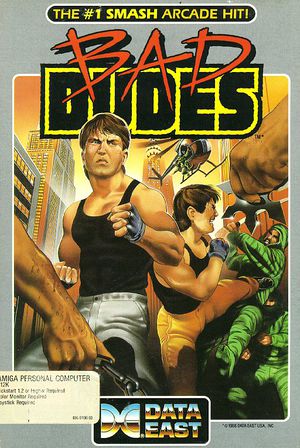 Box art for Data East's own port of Bad Dudes. 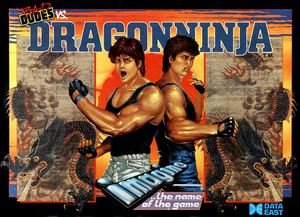 Box art for the Imagine port of Bad Dudes vs. Dragonninja.