Blasteroids is a one or two-player update of Atari's seminal "Asteroids", where the object of the game is to clear all sectors of the asteroids and enemy ships. Once this task is completed, the player goes on to battle Mukor - the "boss" asteroid who rules all galaxies - and destroy him.

The player's ship appears first in the center of four vortices, he or she must chose which vortex they wish to enter, which then transports them to a sector of their chosen star system.

Unlike Asteroids, the player ship has a finite amount of fuel which must be replenished as often as possible. This is achieved by destroying specifically-colored asteroids which turn into collectible crystals. Not all sectors contain the crystal-bearing asteroids, however, and if the player runs out of fuel, a ship is lost. The game contains three different ship configurations and the player can switch between them at any time during a level. The three configurations are : Speeder (small and fast, but weak), Fighter (medium speed and strength) and Warrior (large and strong but very slow).

Additional power-ups can be collected to improve the player's chances, some of the items available are : additional guns, larger fuel tanks, crystal magnets and impervious shields. Some of these add-ons are time-limited while others last until the player's current ship is destroyed. In the asteroid field, there are also 'popcorn' asteroids; small blue rock formations that grow larger and travel faster with each hit they take until they become large, non-moving objects on the screen. These obstacles must be avoided since hitting them will drain all of the ship's fuel, costing the player a life. A popcorn asteroid can not be destroyed. Hitting anything other than bonus power-ups and energy crystals costs precious fuel. Clearing a sector of all of its asteroids takes the player back to a screen and shows a preview of all of the cleared and uncleared sectors in this star system. Some sectors are marked as "unknown" and no preview is offered for these levels. From here, the player can choose which system they wish to tackle next. All systems need to be cleared before the player is given the chance to battle against Mukor himself. To kill Mukor, the player must eliminate each of the volcanoes with multiple blaster hits. Destroying a volcano causes Mukor to release bonus power-up items, and destroying all of the volcanoes causes Mukor to flee, returning the player to the selection vortices.

Later, after all other sectors have been cleared, the player will eventually have to face Mukor again and this time, the enemy boss will have to be destroyed. After Mukor has been destroyed, the game ends.

In the simultaneous two-player game, the first person to fly their ship into a vortex chooses the star system to which the players go. A unique feature of two-person play is the docking of ships : to dock, one player must transform their ship to the largest size while the other transforms to the smallest. By touching the two ships together, they dock and form one large ship. The player originally with the larger ship now controls the speed and direction of the docked ship and can fire straight forward. The player with the smaller ship controls a turret that can rotate and fire independently of the main ship. The dock is broken when the player with the small ship hits their 'thrust' button.

The game was originally to have areas in which a certain ship form was required to get through them, but the game's production was pushed forward, and it didn't receive the fine-tuning that was originally planned.

Background space-scapes, pictures of space ships, asteroids and other obstacles are actually digitized pictures of real-life objects. The asteroids were digitized by non other than ILM (Industrial Light and Magic), Lucasart's industry-leading special effects company.

The prototype version of Blasteroids has the programmer's head (Ed Rotberg) hidden in it.

(Prototype version only) - To find his head, start a game on medium difficulty... complete the first wave, then pick the upper right hand wave next. Shoot the blue crystal rocks until they turn into spinning heads. 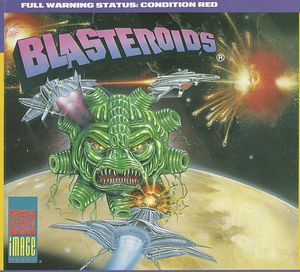 Box art for the Image Works port of Blasteroids.