Cabal is an arcade videogame shoot-em-up where you must help a pair of soldiers make their way through dangerous battlefields filled with enemy soldiers & vehicles in order to take down an evil dictator. Don't forget to take cover if neccesary and grab any weapon you can find! Features plenty of secrets & destructible background objects!

A bootleg of this game was made by "RED Corporation".

In the bootleg version, you may roll up with the third button.

The game has an 'anti-leeching' tool. If you delay a lot of minutes (between 4 and 5 minutes) on the same stage/screen, you will receive a hard 'rain of bombs', like that bombs the airplanes shoot on you. Try to do it on the stage 1-1, the easiest. And if you delay a lot of time in the same position of the 'enemy' bar, without progress, you will receive this rain of bombs easily. Yeah, if you are expert, you will can survive to these bombs, without die, using your skill on the 'rolling' move. You will receive a lot of items (bombs, weapons) if you destroy bombs or if you shoot at the bush. 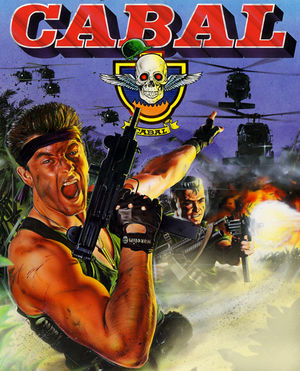