Cisco Heat is a colourful chase-view racing arcade video game in which the player takes on the role of a police officer who must race his squad car (from a choice of 2; offering either improved 'Speed' or 'Cornering' respectively) through the undulating, winding streets of San Francisco', in an attempt to win the first ever 'National Championship Police Car Steeplechase'.

Each stage is packed with rival squad cars, as well as civilian traffic such as taxis, trams and fire-engines. Ninety-degree turns must also be negotiated in this tricky driving game. Cisco Heat features five different stages.

Cisco Heat's distinctive graphical approach proved to be a little too ambitious for its host hardware, with flickering and occasionally unpredictable sprites making an appearance. 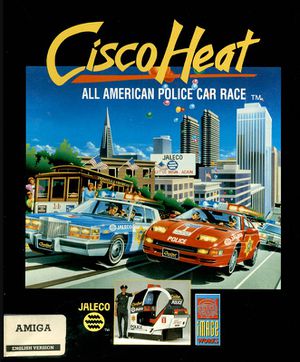 Box art for the Image Works port of Cisco Heat