Continental Circus is Formula One racing themed, arcade video game in which the player races over a number of International Grand Prix circuits, trying to complete each lap before the time limit expires. Continental Circus features Pit-stops and dynamic weather; the latter in the form of rain.

If the player's car is hit by either a rival car or strikes a trackside barrier, the car will be damaged and begin to smoke. The player must 'pit' at the earliest opportunity to get the car repaired, otherwise the fire will spread and the car will eventually explode. Should the player's car have a second collision before the Pit-stop is reached, the car to explode, wasting precious time before a replacement car appears.

Like Nintendo's 1981 classic, "Donkey Kong", Continental Circus was the victim of a mistake during the translation from Japanese to English. The game was orginally to be called 'Continental Circuits'. All the artwork on the US games was later corrected to say 'Continental Circuit' but the original Taito PCBs are clearly labeled with the epithet, 'Circus'. Note : F1 is often called the 'F1 circus' because it is like a big circus that travels to different cities across different continents.

Continental Circus was unique at the time in that certain cabinets came supplied with a '3D visor', through which the player viewed the action. The visor, similar in outward appearance to the one used in Atari's "Battlezone", produced a simple but effective 3D effect. This effect could be disabled by the arcade operator via the dip switch settings.

The race car driven by the player is the 1987 Camel-sponsored Honda/Lotus 99T Formula 1 car as driven by Ayrton Senna (1960-1994) and Satoru Nakajima. Sponsor names such as 'Camel' and 'DeLonghi' are misspelled deliberatly to prevent copyright infringement under Japanese law. 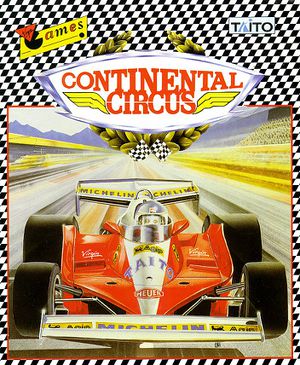 Box art for the Virgin Games port of Continental Circus.