Contra is an hectic one or two player, arcade video game, platform shoot-em-up featuring 5 stages. 3 of the levels are standard side-scrolling platform levels, while the remaining two are enemy 'bases'; 3rd person into-the-screen stages in which players must run down series of heavily defended corridors to reach and destroy an end-of-level boss, before moving onto the next stage.

In 2631, a meteorite strikes the Galuga archipelago near New Zealand, carrying with it a dormant alien lifeform. Two years later in 2633, a terrorist organization of alien origin called Red Falcon takes over the island as part of their plot to invade the Earth. Bill Rizer (player 1) and Lance Bean (player 2), of the Contra unit, are sent to the Oceania island to stop the evil threat.

Each player's character is equipped with a semi-automatic machine gun with an unlimited amount of ammunition and can jump, move and fire in all eight cardinal directions. Players can also move and jump simultaneously while firing. Co-ordination of the character's movement is essential as a single hit from any enemy, bullet, or other hazard will instantly kill the player's character and also eliminate the current weapon from the player's inventory.

As players fight their way through the enemy-packed levels, additional weapons can be collected. If the player loses a life, they will also lose any weapon power-up they were carrying. Available weapons are :

The game's 5 levels and bosses are as follows :

This game is known in Europe as "Gryzor".

Note : The kanji on the Japanese version title screen actually reads 'Kon To Ra', meaning 'Soul Big Dipper Gauze'. This is an example of 'ateji', in which Japanese artists use the phonetic value of a character to fit the game's name, allowing them to write the name in kanji as opposed to a kana.

The music from the final stage is also used for the final boss confrontation in "Wai Wai World" (A.K.A. "Konami World" ) for the Nintendo NES/Famicom.

The game's backstory differs between sources. The storyline written above is the one used by Japanese sources and later mentioned in canon in Contra: Shattered Soldier for the PlayStation 2. In the North American manual for the NES version, the time was changed from the 27th century to the present day, with the location moved from Galuga to an unnamed South American island. Bill and Lance were given the codenames "Mad Dog" and "Scorpion", names which were later used for 2 unrelated characters in the American-produced Contra 4 for the Nintendo DS. 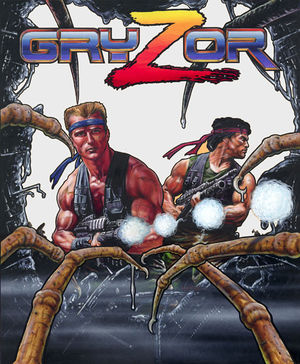