Dragon's Lair is THE original Laserdisc video arcade game, the video and sound sequences for the game are stored on a Laserdisc. This unprecedented game lets a player participate in an animated and interactive motion-picture experience.

Dragon's Lair is the first game born to the new generation of video games. This unprecedented game is the first motion-picture type fairy tale you interact with.

As Dirk the Daring, a player's goal is to rescue the princess. The adventures along the way are horrible and terrifying, but, a skilled and brave knight, like honor and truth, can prevail.

A player has a choice of 5 moves at any given time. A complete game of Dragon's Lair requires more than 200 correct moves. Timing is critical! Dirk can't be too hesitant or too eager to make a move. Only experience and a good memory enable Dirk to complete his mission.

The game opens with the dark visage of a foreboding castle looming in the distance. The next thing you know, you are Dirk, running across the castle drawbridge. The gate clangs shut behind you, and your quest to kill the dragon and save Princess Daphne has begun!

More than 40 possible episodes will be presented to you. Some require many fast repeated moves; others will require fewer, more calculated moves.

Dragon's Lair can be a 1-or 2-player game. If 2 play, 2 twin knights engage in mortal combat with the same demons until they both die (use up their lives), or until one rescues the fair princess from the dragon's lair.

At the beginning of the game, if the player makes a wrong move and loses a life, a new scene will appear at random. Later in the game, a scene that is not completed properly is repeated until it is mastered. Also, when a player loses a life, the scene stops, the screen turns blue, and PLAYER 1 or PLAYER 2 is displayed on the screen, along with that player's number of remaining lives.

Princess Daphne appears during the game, in distress and crying for help. She is unattainable until the end.

The images for the game are stored on a Laserdisc, a type of storage device. Dragon's Lair uses a Laserdisc player made by Philips (model 22VP 932/00) and a Z80 microprocessor to generate the images and action required for game play.

Most of the sounds you hear during game play originate from the disc.

SWORD BUTTONS : Causes Dirk to draw and use his sword.

JOYSTICK : Controls Dirk's movements. Dirk moves in the direction that the joystick is pointed. In some instances, moving Dirk to an object causes him to do something with that object.

The attract mode of the game displays various short vignettes of gameplay with the accompanying narration : 'Dragon's Lair: The fantasy adventure where you become a valiant knight, on a quest to rescue the fair princess from the clutches of an evil dragon. You control the actions of a daring adventurer, finding his way through the castle of a dark wizard, who has enchanted it with treacherous monsters and obstacles. In the mysterious caverns below the castle, your odyssey continues against the awesome forces that oppose your efforts to reach the Dragon's Lair. Lead on, adventurer. Your quest awaits!'

The animation was done by Don Bluth Studios, which also did feature-length animated movies such as 'The Secret of NIMH' and 'An American Tail'. Don Bluth was a former Disney employee who left to start his own company. To keep the cost as low as possible, they decided not to hire professional voice actors. Instead they all pitched in and did the voices themselves. Sound Engineer, Dan Molina was the voice of Dirk the Daring. Vera Lanpher, head of assistant animators, was the voice of Daphne. The narrator was Michael Rye and the musical score was created by Christopher Stone.

Dirk only speaks twice. Once, he mutters 'Uh, oh' when the platform begins to recede during the fire-swinging sequence, and exclaims 'Wow!' when first entering the dragon's lair.

Dragon's Lair had a huge impact on the arcade industry in 1983 (grossing more than 32 million dollars in the first eight months in the arcades). It was so big that quite a bit of merchandise was produced. Dragon's Lair books, buttons, trading cards, stickers and toys were just a few of the many different items that could be purchased.

Marvel Studio produced a Saturday-morning TV-show based on the game. The TV show, produced by Ruby Spears, debuted in the fall of 1984 on ABC and lasted only 1 season.

There was also a Dragon's Lair feature film that was planned, storyboarded, and written but never put into production. The film was to be called 'Dragon's Lair - The Legend'.

Because the monsters and traps to be overcome are so numerous and constantly changing, it is not possible to list the range of scores awarded for each one.

On some versions of Dragon's Lair the programmers left a secret Easter Egg that allows you to have unlimited lives. To access it, wait for the Attract Mode to begin, then hold the joystick UPLEFT and press the Sword button while inserting your quarters. Release the joystick and then select 1 player. You will now have unlimited lives until you complete the game. 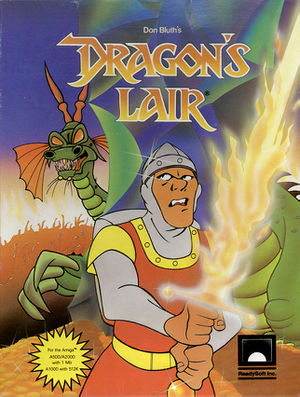 Box art for the ReadySoft port of Dragon's Lair. 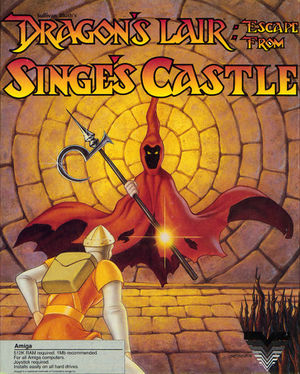 Box art for the ReadySoft port of Dragon's Lair: Escape From Singe's Castle.