This is a 1 or 2-player game where you play one of 4 Chinese heroes on horseback and try to kill hordes of enemies. This game always scrolls to the right.

The background story and all characters are based on factual history : the Period of Three Kingdoms after the 'Han' Dynasty in China. Character designs were based on a popular Japanese comic called 'Destruction of Heaven and Earth'.

This game is known in Japan as "Tenchi wo Kurau".

The Tenchi wo Kurau series is based on the Chinese tale best known as Romance of the Three Kingdoms. 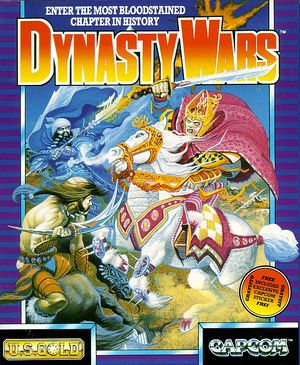 Box art for the U.S. Gold port of Dynasty Wars.