Galivan - Cosmo Police is a single player shooting/platform arcade video game in which the player runs and jumps around a colourful, multi-directional scrolling cave system. A variety of spacecraft and aliens attack in waves and must be killed or avoided. The player starts the game as an unarmed human with only the ability to kick and punch, but picking up a POW item will give encase the human in a robot suit and arm the player with a gun. Collecting the blue POW while in the suit awards the player with a beam weapon for a limited time, while the red POW gives the player a three shot cannon. POW items are dotted throughout the levels and can also be gained by shooting the blue robot aliens.

The player's character has an energy bar that decreases when the player is attacked, and should this fall below halfway, the robot suit will be lost and the player will once again be an unarmed human. Collecting a POW item will restore the player's energy, if a POW is collected while wearing the suit, however, the player's energy will NOT be increased but their weapon will receive a power-up.

The game is inspired by the Japanese telefilm 'Space Sheriff Gavan'. 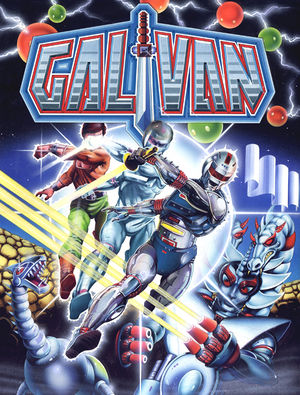