Golden Axe is an horizontally scrolling beat-em-up arcade video game, set in a traditional fantasy world, in which between 1 and 3 warriors take up arms to save the King from the evil Death Adder. The 3 different player characters are an Amazonian warrior, a barbarian hero and a viking dwarf. Each hero uses a different kind of magic : the barbarian uses earth magic, the amazon uses fire magic and the viking dwarf uses lightning magic. In addition : each player character also carried a different weapon : the amazonian warrior and the barbarian both use swords while the viking dwarf uses the Golden Axe itself.

Each character in the game has a special attack move that is activated by pressing both JUMP and ATTACK at the same time. Also, double-tapping the joystick right or left will cause the player to charge and smash into opponents. At certain points during the game, players will come across certain creatures (such as dragons) which, once their original riders have been knocked from the saddle, can be mounted and used against the enemy.

At certain points during a level, as well as at the end of each level, drawfs appears carrying a sack on their back. Players can hit the drawfs causing them to drop food and magic potions.

Once the game has been beaten, the ending will show a view of an arcade where the characters 'jump out' of the game, run out of the arcade and down the street.

Uchida originally wanted to make a theme similar to "Dragon Quest", but seeing as how the higher ups at Sega didn't quite see the charm in that, Uchida and his team ended up making Golden Axe, thinking that selectable characters and flashy magic spells would make for a success. The game did end up becoming one of Sega's big franchises early on and spawned multiple sequels.

Note : The kanji on the title screen actually reads 'Senpu', meaning 'Fighting Axe'. This is an example of 'gikun', where Japanese artists use the phonetic value of a character to determine the game's name and not the meaning of the character itself.

Many of the samples used for Golden Axe and its sequel were taken from the movies 'Rambo - First Blood' and 'Conan the Barbarian'. More specific when you kill bad guys sometimes they scream something like 'Oooh God!' which was taken from Rambo at the scene which takes place in the forest when one of the policemen fell into a trap and gets impaled by sharp pieces of wood. The sample used for the man who gets trampled by a bad guy in Golden Axe and the scream of Death-Adder when falling from the dragon at the final scene of "Golden Axe - Revenge of Death-Adder" was taken from the policeman who also fell from the helicopter pursuiting Rambo. Finally the battle cry used for the big baddies when they die in Golden Axe and the scream for the big chained green monster on "Golden Axe - Revenge of Death-Adder" on stage 3 are the same and taken from Conan's scene where Arnold Schwarzenegger fights the two villains on a Stonehenge like background and again one of them gets impaled by a trap.

Two limited Edition Comic Book Series' to accompany the game were published in the UK in the early 1990's. They can be found along with other Sega related adaptions in fleetways 'Sonic The Comic' which ran for approximately 200 issues.

If a player's health is at zero (no life bar visible) when the bonus level/intermission ends, s/he will begin the next level at full health (three life bars). So if you CAREFULLY hack one another, you can restore your health. You should allow the other character to recover after each swipe, otherwise you may throw or kick and actually kill the other player. 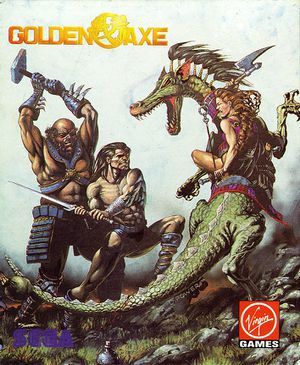 Box art for the Virgin Mastertronic port of Golden Axe