Hunchback is an arcade video game.

A classic and much-copied platform game in which the player takes on the role of the eponymous bell-ringer, Quasimodo, in his quest to rescue the beautiful Esmerelda from the tower of the castle fortress. Quasi must complete a number of static screens, each presenting the player with different obstacles, to reach Esmerelda. These range from spear-toting guards, to firey chasms to missiles (fireballs or arrows) that must be jumped. Some of the trickier screens can contain more than one of these obstacles, such as spear-toting guards AND missles.

One final problem that appears on every screen is the time limit. This takes the form of an enemy guard climbing the castle walls, if the soldier reaches the top, he will try to burn the Hunchback with his torch. If the Hunchback rings the bell before the guard has scaled the wall, a bonus score is rewarded.

This video game is based on the novel 'Notre-Dame de Paris', by Victor Hugo.

The name Quasimodo translates as 'half-formed'.

The hunchback character was originally to be 'Robin Hood'. Hence the green costume and the game stages with arrows. The artist (who drew the Robin Hood character) left the company before the decision to change the theme to 'Hunchback'. By the time a new artist was taken on, the green costume had become accepted and no-one questioned it (someone commented that the Robin Hood character, as drawn, looked like a hunchback).

Roberto Picelli holds the official record for this game with 478,700 points.

Scoring points is based on how quickly you can finish a round, although there is no actual on-screen indication as to how much bonus time is left. No points are awarded for merely jumping over obstacles. The best way to achieve a high score is to complete five consecutive screens without losing a life; at the end of each stage a bell is awarded, and once five bells are collected in this way, a Super Bonus worth between 10000 and 30000 points is awarded. 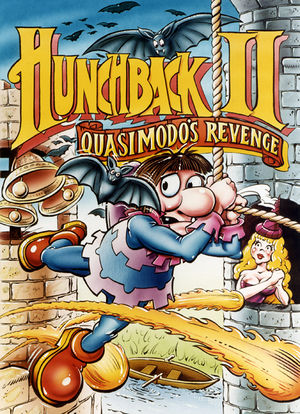