Lost In Translation/Indiana Jones and the Temple of Doom (Atari)

Indiana Jones and the Temple of Doom is an arcade video game based on the film of the same name.

The player takes on the role of action movie hero, Indiana Jones, in a game that takes place over 3 different zones; the mines, a minecart chase and the temple. The first level features a number of platforms, ladders and slides and Indy must free kidnapped children by finding their cages and whipping them open.

The player must also keep an eye out for rattlesnakes and Thuggee guards. The second zone is a recreation of the famous minecart chase in the movie and the player must guide Indy's cart to the bottom of the mine; keeping ahead of enemy carts and voiding traps and track-side enemies. The final area takes place in the temple itself and Indy must make his way to the altar and retrieve the Sankara stone. Indy must avoid guards and also flaming hearts thrown by the game's enemy boss, Mola Ram.

The player can choose to start the game on any one of 3 difficulty levels : easy, medium and hard. These are selected at the beginning of the game by entering the corresponding door. Once all 3 Sankara stones have been collected, Indy must work his way through a final mine and minecart section, before making his escape on the rope bridge and facing Mola Ram once and for all. Playing the easy level will not include this level the first time Indy acquires all three stones. Instead, a message will appear stating that Indy escaped on the rope bridge. The player is then returned to the game, starting again on a more difficult mines level.

Theme music and sound effects are from the movie of the same name. This is the first Atari System I game to use speech chip capability to talk to players.

At the difficulty select screen, whip all the hanging skeletons and both snakes to receive a 5,000 point 'Completion Bonus'. Whipping all the gas cannisters in the mines stage gives a 'Pyro Bonus' and whipping every bone pile and snake in the altar stage also gives a bonus. On levels which feature pits of molten lava, whipping enemy guards until they fall in the lava will earn additional bonus points. 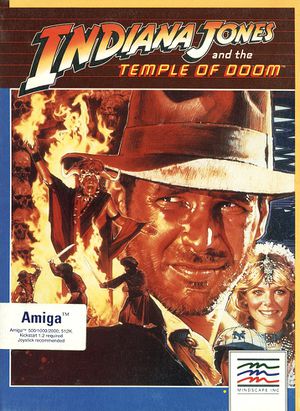 Box art for Mindscape's port of Atari's tie-in of Indiana Jones and the Temple of Doom.