In his never ending quest for adventure and excitement, man invented off-road racing. These races were then brought before the masses by converting huge sports stadiums into dirt and mud obstacle courses in which off-road 'Ironmen' battled for top honors.

Ivan IRONMAN Stewart's SUPER OFF-ROAD is stadium off-road racing at it's best. One to three players are asked to test their dirt track skills against the best dirt truck driver in the world.

Contestants compete on 8 different tracks with a total of 16 configurations and these courses are packed with enough jumps, bumps, hills, and holes to challenge even the most skillful driver.

Winning drivers earn 'cash' prizes, and use this 'cash' to 'buff out' their machines. At the end of each race, players take their trucks to the 'Speed Shop' to buy better shocks, tires, engines, and higher top speed. They can also buy nitro packs to help them blast over the jumps and through the mud.

The 'Convert-a-Credit' feature allows drivers to add to their winnings by using credits as 'cash'. Each additional quarter, when converted, becomes $200,000.00 in game 'cash' and this additional 'cash' may be used for purchases in the 'Speed Shop'.

Ironman Ivan Stewart's Super Off-Road is the first arcade game to feature Dynamic Play Adjustment (DPA), the cpu would change the speed and skill of the grey car (supposedly Mr. Stewart himself) in relation to your performance in the game, in order to ensure high earnings and close contests.

Ivan Stewart is a legend in Off-Road racing. He gained his nickname 'Ironman' as a result of competing in many marathon treks through the desert. Each time he won a Baja 500 or Baja 1000 race, held in the heat of Mexico, Stewart received an 'Ironman' award. Mickey Thompson, the man behind the Off-Road Championship Grand Prix Series began referring to Ivan Stewart as 'The Ironman of Off-Road Racing' after he picked up the Drivers' Points Championship in two successive years. While the tag has been shortened a bit, the title 'Ironman' has stuck.

An upgrade kit for this game exists and is called 'The Track-Pack' (see Updates section for more info). 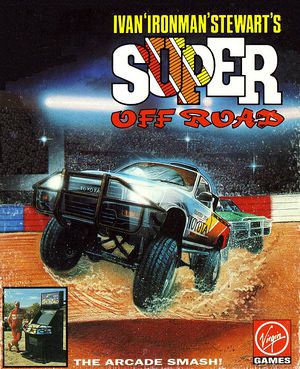