Two players can play at the same time and compete to reach the goal first. The player controls a red marble or a blue marble via the correspondingly colored Trak-Ball controls.

The player's main goal is to race toward the goal in minimum time by maneuvering his red or blue marble along treacherous paths high atop the unique cubic raceway. The timer ticks away and ends the game if the player does not reach the goal in the allotted time. Numerous obstacles and unfriendly creatures on the raceway try to destroy the marble. The marble will always magically reappear, but, of course, several precious seconds on the timer are lost.

Upon reaching the goal area, action briefly stops while the player's points are tallied. Bonus points are awarded for unused seconds on the timer and for finishing the race without losing a marble off the edge of a cliff. In the two player game, the players can race along cooperatively, each going for maximum points, or they can compete by bumping each other into hazards or off the cliffs.

The action resumes on Raceway Two where the player encounters the first adversaries; the Black Steelie and the Green Marble Munchers. The Black Steelie and the Marble Munchers' sole purpose is to try to block the way to the goal. Remember, the player must reach the goal before the timer runs out to advance to the next raceway! The player can complete six different raceways, each successive one requiring more skill.

Mark Cerny was only 17 years old when he joined Atari and designed Marble Madness. The game was designed as part of a contest Atari ran at the time, allowing outsiders to design a game. Mark was very well known for his game-playing skills and easily won the contest. He then taught himself how to program in assembly language before joining Atari, so he found it very easy to settle in at Atari.

Released in December 1984, Marble Madness was the first game to run on the new Atari System 1 hardware and was the perfect showcase for Atari to demonstrate the technical superiority of its new arcade architecture, it was also the first game to feature such impressive and cleanly rendered pseudo 3-D Graphics. The original design brief called for the trackball to be motorized and synchronize its spin with that of the marble, to simulate inertia.

The race names are :

Stan Szczepanski holds the official record for this game with 187,880 points.

A sequel to this classic game, entitled "Marble Madness 2 - Marble Man" was fully developed and a very small number of cabinets were built, but unfortunately the game was never released. Unlike the first game's superb trackball control, 'Marble Man' was controlled via a joystick.

Begin a game and then hold down either the 1 or 2 player Start and press the 'service switch' twice. The first press will glitch the screen display slightly - the second will remove it and give you 99 seconds to complete the level. This method adds 60 seconds to the clock, after which the normal countdown will begin. The clock will not appear to be counting down during the first 60 seconds, probably because the 99-second display was overflowed by the extra 60 seconds added. This method can be used multiple times per level for virtually infinite play time. 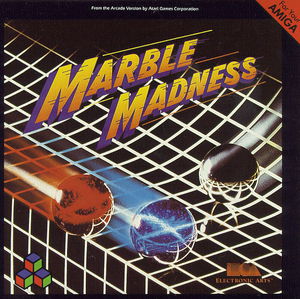 Box art for the Electronic Arts port of Marble Madness. 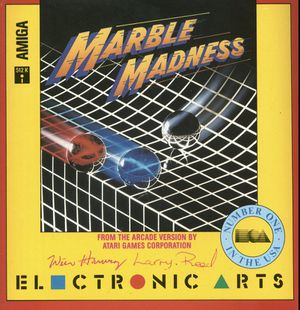