One or two players take on the role of two commando brothers whose entire family has been kidnapped and must be rescued. The game's eight large, eight-way scrolling levels are made up of platforms, ledges and ladders; each populated both with enemy soldiers and with intricate, imaginatively designed enemy machinery. As the players make their way through a level, they will be able to pick up red 'keys' - which are left behind by defeated enemies; collecting these keys will allow the players to upgrade their weapons at the shop that awaits at the end of each level.

The game's ending changes slightly depending how many family members are rescued before the final battle! Save them all!

A Midnight Resistance unit appears in the 1990 movie 'RoboCop 2'.

The game's ending changes slightly depending how many family members are rescued before the final battle. For the 'proper' ending, all family members must be saved. The players must have the full count of six red keys in order to release all of the prisoners. 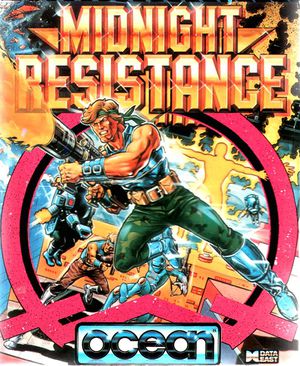