Mikie is an arcade video game.

The classroom level of Mikie plays the song 'A Hard Day's Night' by The Beatles. The Gym Level plays 'Twist and Shout', the Medley/Russell song made famous by the Fab Four.

This is the original version. Mikie has red hair (because we all know that redheads are temperamental troublemakers). Football players are now Bulky Students (Classroom) or Police/Probation Officers (Garden). All of the students wear uniforms, including Mikie. Your classroom teacher wears a white shirt and is somewhat pudgier than his American counterpart. Many of the rooms also have a slightly different appearance and I believe the dance studio teacher wears glasses. Go figure.

Aside from the noticeably different decor in the homeroom (all right, it's only the blackboard), there are several MAJOR differences in this MUCH harder version. Hearts that were normally in glass cases are stacked as piles of three hearts (you only have to time the last heart for Perfects). Furthermore, you can't headbutt in this version, you have to yell, which temporarily stuns enemies EXCEPT FOR your homeroom teacher, who cannot be stopped except by thrown items. Yelling is also much shorter range than headbutting, making timing crucial. Not a version for the weak-reflexed. Most importantly though is that if you take too long in a room, the Classroom teacher can throw what looks like either a necklace or dentures at you. On the plus side, you recover faster from a yell than a headbutt (less lag time) and enemies don't speed up as fast as they do in the other romsets (unfortunately, it seems as though the homeroom teacher will speed up on his own in this romset).

In game instruction scene between title screen and demonstration play, input the following code when player character sits on a chair : hold 1P Up + 2P Down then press 1P Start 4 times. "THIS SOFTWARE IS AN ORIGINAL PRODUCT OF KONAMI" should appears. 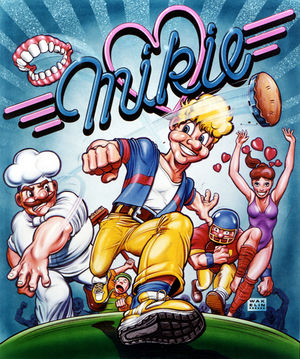