Narc is an arcade video game.

A graphically violent 1 or 2-player side-scrolling shoot-em-up in which players take on the role of "NARCS"; futuristic police officers whose duty it is to either arrest of kill drug dealers, junkies and attack dogs. The NARCS have machine guns and rocket launchers at their disposal, and players can also pick up discarded drugs and money to earn extra points. These are totaled up at the end of each level. In addition, a special colour-specific 'Keycard' must often be found before players can progress to the next section of the level.

Max Force (Player One) was a part of Acclaim's (who made the NES version of NARC) 'Power Team' along with Tyrone ("Arch Rivals"), Kuros (Wizards and Warriors/Ironsword), Bigfoot (the monster truck) and Kwirk the tomato, in an animated series featuring the characters. Three of the NARC bosses : Mr. Big, Dr. Spike Rush and Joe Rockhead were the villains on the series.

Grunge band the Pixies released a cover of the tune from level 2-1 of this game in 1991 as 'Theme From Narc', as a B-side to the single 'Planet Of Sound'. It can also be found on the later 'Pixies Complete B-Sides' album. 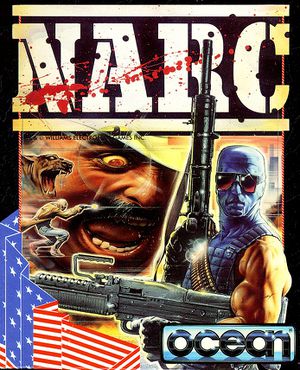 Box art for the Ocean port of Narc.