Lost In Translation/Newzealand Story, The

The Newzealand Story is a platform arcade video game.

Set in Antipodean country of the game's title, The New Zealand Story is an incredibly cute and challenging platform game featuring Tiki the Kiwi bird, possibly the most lovable arcade character ever created. Tiki's fellow Kiwi birds have been kidnapped by an evil walrus and Tiki is charged with rescuing his friends.

The New Zealand Story is a superb, constantly inventive and very demanding platform game that features a wide variety of intelligent and distinctive enemies; such as heavily armed ducks, angry walruses, and whales made of ice that spit giant snowflakes.

During his quest, Tiki can commandeer a variety of different weapons and vehicles - the latter of which include balloons and a hovercraft. The level design is superb, with exploration often rewarded with either bonus items, alternate routes to the end of the level, or secret level warps that transport the player to a later level (see 'TIPS AND TRICKS' for more details).

The hero of this game, Tiki the kiwi, also appears in other Taito games like "Liquid Kids" and "Bubble Symphony" as a guest star.

Zoological note : unlike Tiki, a real Kiwi bird is a brown in colour and is roughly the size as a domestic chicken. It is flightless and its distinctive plumage resembles hair more than feathers. The Kiwi bird lives only in New Zealand and, due to its rarity in the wild, is a protected species.

The following is for the Japanese version of the game which, curiously, was the version that tended to be converted to the various home formats; regardless of territory.

Throughtout the game there are several hidden 'Warp' gates, which take you to secret areas and later levels.

In the last room of this stage, there are 3 identical platforms placed above one another. Go to the highest one, face left and jump about whilst shooting, after 5 shots a warp should appear. This takes you into a enclosed box on round 2-1, only this time it has got the 'E','X','T' letters. There is an escape warp to the right which you must shoot to make it appear. From here you are taken to round 1-4 (in an unaccesible area below the boss room) where you'll find the green 'E','N','D' letters, you now have your first extra life. To get to know more about round 1-4 (which is important in the game) keep on reading.

In the start area, jump onto the second platform and shoot to your left 5 times. A warp should appear, enter it and you'll be taken to a room of the secret round (the secret round is a place where almost ALL of the secret rooms are found - like separate rooms in any level - and you can't visit more than one at a time, since they are all separated by closed walls). There are two large columns with water one to either side of you. Each has an open Warp above it. The right warp will take you to an upper place in level 1-2, where you simply collect some apples (for points) and then continue through the level normally. The left warp, which is the better of the two, takes you to a place under the level. Going from left to right, you find a place with upwards tunnels you can jump in. Go to the one full right, since there you will find the letters 'red E' and 'X'. Then, going all the way up, you are just near the cage at the end of the level.

This level has two warps, the first of which needs a vehicle and is just after you fly down to the big open area of this round. Fly downwards while staying close to, and facing the left-hand wall, keep firing towards the wall and about two thirds of the way down, the first Warp will appear. This will take you to a secret round where you collect the 'red E','X', 'T','green E' letters then on a hidden place of round 2-1,where you collect the 'N' and 'D' letters : EXTEND, and also you can choose to finish round 2-1 OR...

The second Warp is in the last room. Climb out of the water and head straight upwards - the trapped Kiwi is to your left). This will take you to a secret round, which also has got a secret warp in it! The round has the 'TEND' letters, exits to 1-4, and a Warp exit to 2-2.

This round has a Warp, but it's only accesible from another Warp that appears on a LATER level (2-1). Once you have come to this level via the Warp on 2-1, go to the platform directly UNDERNEATH the Boss room (after you've collected the letter), the Warp is in the far left corner of the upper-most platform underneath the Boss room and takes you to level 2-4.

Note : The trick of using the 2-1 warp to go back to 1-4 infinitely doesn't work in the WORLD revision. The programmers added some blocks to the box so that the Kiwi cannot be sucker in the warp.

This is one of the key rounds of the game, as it allows for one or two tricks and has two warps. The first one is in the right corner of the closed box at the end of the level. You can get inside the box from the warp on level 1-1. However, it's possible to enter the Warp from OUTSIDE the closed box by using a flying vehicle and, for preference the laser weapon or Fire Staff.. If you've only got arrows ,bombs, or a laser and no vehicle, take advantage of the microbes that appear nearby. Keep killing them anytime they appear (if you move away from the screen where they appear they will appear more often) until the Fire Staff appears. Once opened, just jump in it from below. You will be taken BACK to the secret area in level 1-4. This means that you can effectively keep going BACK to level 1.4 through the Warp as many times as you wish, stocking up on points and bonus lives as you go.

Should you chose NOT to do this, you can head for the second Warp. First, ensure that when you are at the enclosed box and that you also have a vehicle. Simply fly OVER the enclosed box and drop down behind the caged Kiwi. On your right there is a 'ladder', go up this and you'll be in a small, enclosed room; shoot the lower-left edge of the room and the Warp appears. This will take you to an independent secret level which has 2 possible exits. The first is at the end of the level - after the yellow lift you head down and left and drop through a hole in the floor - this takes you to level 2-3. The second exit is a warp. Stand on the yellow rising block and jump from it so you can stand on the wall to your right (you would do this anyway, to avoid the ceiling spikes and get to the exit...). Shoot 5 times and a Warp appears. This will take you to another secret level - with a number of enemies - and the letters 'Green E' and 'T'. Take the letters, kill all of the enemies and enter the Warp that subsequently appears.

The only warp on this level is in the upper right-hand corner and can only be reached with a vehicle. This takes you to the end of the level.

Also one warp on this round. This is found in the place left to the 'Red E' (bottom righ of the level). This will take you to a place with a 'Red E' and an 'X', and a warp from there to an advanced point on level 2-3.

Before the Boss Room (the one with the octopus) shoot to the right - standing on the blocks over the spikes - and a warp will appear on the fifth block from the left. This leads to a secret level with enemies and the letters 'T' and 'Green E', and THEN to level 3-1, inside the 'box'.

There is a warp near to the end of the level on the wall between the two 'pools' of water with waterfalls, This will take you to a room in the secret level, with a church for background. Nothing to take, just a warp on the floor that will take you to level 3-3.

This round has got 3 warps, the maximum in this game. The first (and most rewarding) is over the last diagonal row of spikes, in the upper 'dry' part of the level (most of the level is underwater). Fly up there, shoot 5 times as usual and take the warp. It will take you to a place in the secret round and then to level 4-4. There are two further warps that can be found in a long, left-to-right section, just after you have passed the BIG masses of water.

This level has two sub-areas, divided by a barrel at the end of the areas. In the area with the horizontal 'barrel', there is an empty space below it. Shoot it and a warp appears. This takes you to a room in level 2-4, with 2 letters, an 'E' and an 'X', and then you take a warp in that room that takes you to the second area of level 4-4.

This is the last level known to have a warp. Walk on the floor with the small volcano until the last platforms on the left. Go up and then left, you will fall down to a place with some blocks and more volcanos. Shoot to the right right, and take the warp. This takes you to a room in the secret round with 2 red E's and another Warp to a secret level room - with two X's - and from there to level 5-1 again, near the big room.

The heaven levels are secret levels that can only reached when Tiki has lost all of his previous lives and is killed by a SOLID PROJECTYLE (such as arrows, stones, bombs, boomerangs, spears, etc.) If you drown, fall on spikes or lava, get burned by laser, flames or UFO missiles, or are killed by contact with an enemy, a life is lost. The Heaven levels only appear after level 3.1.

During the attract mode, press fire 3 times, and a cute picture of a bear will appear in the bottom-left corner of the screen. 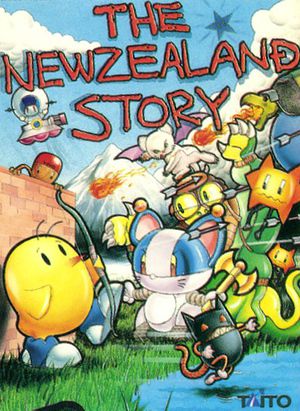 Box art for the Ocean port of The Newzealand Story.