Lost In Translation/P-47 - The Phantom Fighter

You play as the pilot of a P-47. Your mission is to basically destroy as many of the enemies as you possibly can. This means eliminating as many air and ground units as you can. You will be going through four missions (each being broken up into two parts) and at the end of each of these parts is an enemy boss for you to tangle with. Although you have unlimited ammunition, the enemy will make you pay for the invasion into their homeland. You will be able to accomplish this with various power-ups and also a second player (if they buy in). Your mission won't be easy but it is necessary so you can secure both the skies and ground for our troops.

The game is broken up into four missions. Within these four missions, there are 2 parts. One part involves going over land and the other part has you either going over water or being up in the air. Regardless of which part you are on, you will still have to deal with the same basic things. After part two of mission four, the missions will repeat again with mission one.

This game is known in Japan as "P-47 - The Freedom Fighter".

Scoring in this game is complicated. There are a lot of enemy units for you to take out. In addition, some units have multiple parts which also score points. You also get points for collecting items and making it through a mission. The enemy units are broken up into air, ground and boss.

You will also score 10,000 points for completing a mission part.

As soon as you start the game, you will immediately be placed into the thick of the action. Be ready for anything. 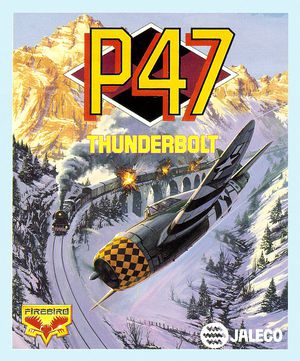 Box art for the Firebird port of P47 Thunderbolt.