You begin the game with ten customers and ten non-customers. Your customers live in the brightly colored houses; non-customers live in dark colored houses. To deliver to a customer, you must throw a paper either on their porch or into their mailbox. Failure to deliver a paper to a customer results in the loss of that customer on the next day. Any damage done to a customer's property also results in the loss of that customer. Losing all ten of your customers will get you fired and your game is over. However, each time you deliver to all your customers you will receive a Perfect Delivery Bonus for that day. And, if you have previously lost any of your ten customers, you will get one of them back as a re-subscriber.

Non-customers' houses and yards are loaded with targets at which to throw your extra papers (windows, lamps, statues, etc.). Upon hitting any of these targets, its respective point value goes into the Breakage Bonus, which is displayed at the top center of the screen. The Breakage Bonus is awarded to the player at the end of each day (or at the end of the game-whichever comes first).

If you lose a customer, that customer's house will be dark colored the next day. As a non-subscriber, this house now presents more targets at which to throw for building up your Breakage Bonus.

Paperboy can carry a maximum of ten papers at a time, but can restock his supply by riding over paper bundles placed here and there on his route. A paper supply indicator is displayed underneath the player's score.

The large cast of colorful characters make it increasingly more difficult for Paperboy to make his way down the street. Eventually, the player must develop great skill in maneuvering Paperboy to avoid street traffic, dogs, cats, various pedestrians, etc. In addition, many of the houses have certain characters associated with them. Non-subscribers are hostile to Paperboy and will attack him and try to knock him down. If you damage a subscriber's property, that character may also attack. So the more customers you lose, the more hostile the neighborhood gets toward Paperboy, and the tougher it becomes to avoid all the characters that are out to get Paperboy.

At the end of each delivery day, you have a chance to sharpen your skills by guiding Paperboy through the Paperboy Training Grounds. This obstacle course is filled with various targets at which to throw and jumps to make. You can't lose lives in this bonus round - any collision just ends the training course segment, after which you move on to the next delivery day. You must move fast through this course and try to cross the finish line before the time at the top of the screen runs out.

At the start of each day, a map of your route is displayed to indicate subscriber and non-subscriber houses. This map is helpful in reminding you of what customers you may have lost on the previous day and the location of your remaining customers.

Select a Street. At the start of each game, you will be presented with a chance to choose your paper route - Easy Street, Middle Road, or Hard Way. Each of these streets has distinctly different house designs and character appearance. Also, each street differs in its aggressiveness (scores are doubled on Middle Road, tripled on Hard Way) and has a unique training course at the end of each day.

You will find that the different streets require different skill levels. One may call for a good deal of throwing accuracy, another lots of tricky maneuvering, and the third a combination of all skills. It's really three games in one.

On Monday, June 30, 1986; Mr. Mark Caesar and Mr. Robin Hallingstad filed a suit against Atari Games Corp. for $1 million plus profits alleging that the company stole the idea for a video game that was marketed by the name of Paperboy. The boys had submitted to Atari a detailed proposal for a similar game in July 1983.

The default high score screen of "Cyberball 2072" features names of many Atari arcade games, including Paperboy.

Phil Britt holds the official record for this game ('Grand Slam' score of all three streets combined) with 1,136,435 points. 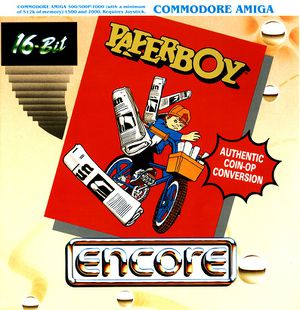