Qix is an arcade video game where the objective is to claim a certain proportion of the playing field as your own.

At the start of each level, the playing field is just a large, empty rectangle, containing the Qix - a stick-like entity that performs peculiar, erratic motions within the confines of the rectangle. The player controls a small marker that can move around the edges of the rectangle. To claim an area of the screen, the player must detach from an edge and draw Stix within the rectangle. Stix are simply lines traced out by moving the marker. When the marker traces out a closed shape, the area enclosed by the shape becomes solid and has been claimed. The player may draw either Fast Stix, which appear blue when solid, or Slow Stix, which appear red. Slow Stix take longer to draw, but are worth twice as many points. Once the player has claimed an area, the marker can safely move along the border of that claimed area. To complete a level, the player must claim 75% or more of the rectangle's area.

The author named the game 'QIX' (pronounced 'KICKS' and not 'QUIX') because his car registration/number plate at the time was : 'JUS4QIX'.

Qix is the first 'drawing game', a truly original game. Also the first totally Taito American game, Qix initially did big numbers, but quickly died when players discovered the machine was 'unbeatable'. Having a googolplex of possible combinations, there was no singular pattern to the game and players lost interest.

There are a couple of ways you earn points in Qix. The first involves actually claiming areas.

There are 2 buttons, slow and fast. These buttons determine how fast your Marker goes. In essence, going slow increases the risk of losing your Marker so it is obviously worth more points. Here's how the points work out for making 'boxes':

NOTE : The above points may not be exact since the game rounds off the percentages to whole numbers for display but calculates them using decimal percentages.

During the split Qix screens, if you successfully split the Qix's into their own compartments, you will get a multiplier bonus that is applied to points scored when you are making boxes. For example, if you had a 250 points and the multiplier was 3X, you now have 750 points. This multiplier increments by one every time you successfully split the Qix's. Of course, when you do this, you don't get the bonus points (if you had any). 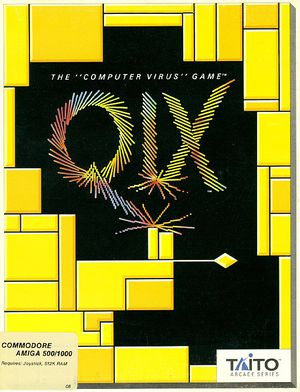 Box art for the Taito's own port of Qix.