Road Blasters is a chase-view driving arcade video game in which the player must shoot rival racers and collect fuel globes to top up his ever-diminishing fuel supply. Power-up weapons are dropped from above and and must be 'caught' by the player. Collision with enemy vehicles will result in the destruction of the player's own vehicle. Digitized speech, effects and music play throughout the game.

The large, sit-down version has a plastic lens over the monitor which enlarges the screen to make it seem like a 25-inch CRT, in a fashion similar to that used in very early TV sets during the 1950s. For a limited period after the game's release, players could win a free Atari T-shirt by completing all 50 levels.

Road Blasters was the last of the Atari System 1 games made. The original name of Road Blasters during its design was 'Future Vette'. 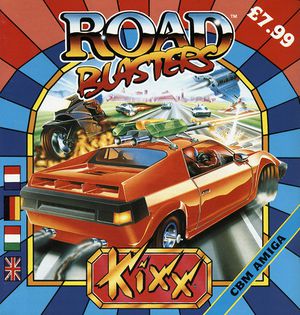 Re-release box art for the Kixx port of Road Blasters.