Rod-Land is a two player arcade video platform game in which two fairies must use their 'Rods of Sheesanomo' - two magical rods that enable the fairies to catch enemies and slam them into the platforms to kill them - to clear each level and continue their journey to the castle, to rescue their kidnapped mother.

As well as the magical rods, the fairies can also create a magical ladder - in a fashion very similar to that used in Taito's "Rainbow islands" - which can be utilised anywhere on a level that players wish, allowing them to reach other platforms or escape from any pursuing enemies.

This game is known in Japan as "Rod Land - Haha wo Motomete 30 Kai".

Rod-Land contains a second episode (see Tips And Tricks section) known in Japan as "Rod Land - Tozasareta Sekai". This time, the storyline has an alien pyramid landing in Fairyland and in this episode, it is the girls' father that must be rescued. The game-play is identical to that of the first episode, with only graphical differences separating the two.

The Second Episode (note : this can also be unlocked via the dip switches settings):

The first episode, when the second is enabled (via dip switches settings): 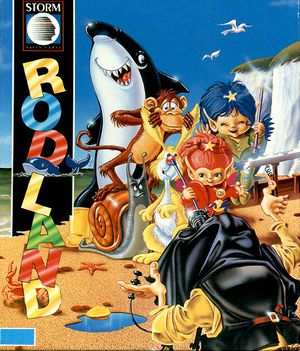 Box art for the The Sales Curve) port of Rod-Land.