The galaxy is under threat from a malevolent race of cyborgs. Half animal, half machine, the cyborgs have already conquered most of the galaxy and now have their sights set on the galaxy's last hope, 'The Planet of the Golden Dragon'. A lone mechanoid dragon, unhappy with the actions of his comrades, rebels and sets out to thwart their invasion of the Planet of the Golden Dragon.

Saint Dragon is played over six different stages. The tail of the mechanoid dragon the player controls is impervious to enemy attacks and causes damage to any enemy it touches. The head of the dragon is effectively the 'ship' of the game and a direct hit from an enemy will result in the loss of a life.

At various points in a stage bronze-coloured eggs appear which, when shot, release weapon and speed power-ups. 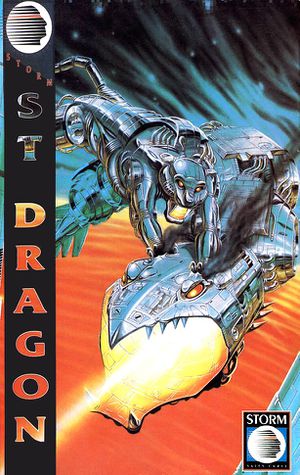 Box art for the Storm port of Saint Dragon.