One gallant earthling stands between the inter-planetary invasion forces of the blue-skinned alien Commander Borf and their intended target, Earth : an earthling named Dexter. On Dexter's narrow shoulders ride the fate of Earth and the well-being of his lovely sidekick, Kimberly, who Borf has carried off into the cosmos.

Dexter sets off in hot pursuit of Lord Borf, battling monsters, machines and mechanisms as he fights his way across the galaxy. During his daring quest, Dexter relies on his wits, agility and quick reflexes to overcome the deadly predicaments and bizarre opponents Borf throws in his path; but when the peril grows too great for even cunning and courage to prevail, Dexter has a secret strength in reserve.

Exposure to mysterious cosmic rays has given Dexter a remarkable ability. Just when our hero seems doomed and all appears lost, he undergoes a startling transformation into his super-mighty, super-bold, super-self : SPACE ACE! - a broad-shouldered, good-natured alter ego who evens out the odds as Dexter struggles to rescue Kimberly.

Pursued to his home planet by this resourceful and relentless adversary, Borf turns and faces Dexter in a final and climactic confrontation. Determined to prevail at all costs, Borf resorts to the ultimate weapon, a weapon capable of reducing even the mighty Space Ace into a helpless infant : the dreaded INFANTO-RAY! Only Space Ace can survive such a crisis, and Space Ace alone can save the Earth, save the girl, and save the day!

JOYSTICK : The joystick controls the direction of movement of the Dexter and Space Ace characters.

The scantily-clad heroine Kimberly was named after one of the people of the animation staff whose name was Kimberly Coy.

The Cinematronics hardware and software were also totally different from Atari's/Sidam's.

Space Ace was re-released in 1991, this time without the different skill levels, was released as a conversion kit for "Dragon's Lair II - Time Warp". But this time it was Leland that produced the game.

Cinematronics went out of business late in 1984, the same year Space Ace was first released. None of the hardware or software from Cinematronics 1984 version were used in Lelands 1993 version.

Space Ace was again licensed to Atari and Sidam (only Italy) for the European market. But this time Leland, Atari and Sidam used some of the same hardware for the 1991 version of Space Ace. Leland used a Sony 1450 LD-player. Atari and Sidam again used a Philips player, allowing them to skip the NTSC pcb.

Some scenes are left out in Cinematronics version, depending on the skill level the player plays. In skill level 'Space Ace' all scenes are included.

In 1991, Leland released a slightly updated version of Space Ace in the form of a conversion kit for the then recently-released "Dragon's Lair II - Time Warp". The updated version added more complicated moves (including diagonal moves), and dropped the easier skill levels, meaning only the 'Ace' (difficult) level could be played. 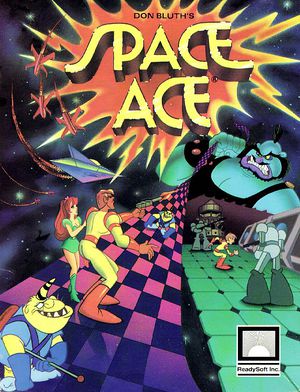 Box art for the ReadySoft port of Space Ace.