Teenage Mutant Ninja Turtles is a 4-player arcade video game beat-em-up based on the comic strip characters of the same name and the subsequent cartoon series.

Between one and four players can choose to play either Leonardo (blue, katana blades); Raphael (red, sais); Michaelangelo (orange, nunchakas); or Donatello (purple, bo staff) as the infamous turtles fight against the might of Shredder's army to rescue April O'Neil and Splinter; before a final confrontation with their arch-enemies Krang and The Shredder. Turtles was a superb use of its license and perfectly captured the spirit of both the comic-book and cartoon series upon which it was based. New players could join the game at any time.

The UK title for this game (as well as both the comics and cartoon series), "Teenage Mutant Hero Turtles", replaced the original 'ninja' of the title with the less threatening 'Hero'. This is because the Conservative British government of the time wouldn't allow ANY 'children's product' to include the word 'ninja' at any point during its content, arguing that to do so would encourage the children of this fine country to use violence against each other.

The Teenage Mutant Ninja Turtles were created by Kevin Eastman and Peter Laird in 1984 and published by Mirage Studios. The whole idea for the comic book (which was originally published in black and white) came from the nickname 'Ninja Turtle' that one of the creators had when they were young.

In 1987, Playmates Toys bought the rights of the characters to produce a line of action figures. That same year Playmates made a TV adaptation of the story for a 5-episode mini series which became a huge success. Two years later, the series went on full production and was aired on CBS stations from 1989 to 1996 (with brief hiatus in 1993-1994).

The success of this 'Humanoid Action Animal' concept spawned (or shed some light on) many other comics, toys and TV shows such as Bucky O'Hare, Swat Kats, C.O.W. Boys of Moo Mesa, Street Sharks, Biker Mice from Mars among others; most of them became complete blunders.

After the first series was cancelled other shows based on these characters appeared, such as, Ninja Turtles: The Next Mutation (Saban Productions, Live Action), Teenage Mutant Ninja Turtles and TMNT Fast-Forward. However, the 1980's craze never took off again.

Konami hit the jackpot with this game. It was so successful that Konami went on a license-acquiring craze. They got the rights to many American (and some European) TV shows and Comic Books for home and arcade video games with a quality so good that sometimes shadowed the original work.

This game is mainly based in the first 5 episode mini-series. However, it contains some references to the original comic book. The opening scene is a mix between a scene in the TV show in which a building is raided by the TMNT to find for the first time the Technodrome and a scene of the comic book in which Shredder sets fire to April's building when he finds she's harboring the turtles (that scene was also taken for the movie). At the Parking Lot scene, there is a van that has the logo of TCRI. TCRI (or TGRI in the movie) was the company responsible for the mutagen; in the TV show, it was Shredder's invention.

There were several distinct versions of this game available in the arcade, but the 4-player dedicated cabinet was the most common by far. There were also 2-player versions, but they are much harder to come by. The TMNT dedicated cabinet was fairly large and had an over-sized control panel (to accommodate four players). The sides were decorated with full side-art showing April O'Neal and several of the turtles in a city scene. The marquee shows a city scene with all the turtles and a live action version of April O'Neal. Frankly they just should have drawn her instead of using a photograph, her hair is just awful. The control panel has a city scene similar to the one on the marquee and has four joysticks (one for each player), each of which is a different colour. These machines all came equipped with 25 open frame monitors, although you will sometimes run into one with a different size screen, these are almost always conversions of other titles. Moving on to the interior of the machine, the game itself runs on a JAMMA compatible circuit board. The board itself will plug into a JAMMA wiring harness, but it has a second harness to accommodate the controls for players three and four. The games "The Simpsons", "Sunset Riders", and "Bucky O'Hare" are fully compatible with this extended harness, and will plug directly into a TMNT cabinet without modification. One thing that you may notice is that the jump and attack buttons seem backwards of what they would logically be, but you get used to it quickly. 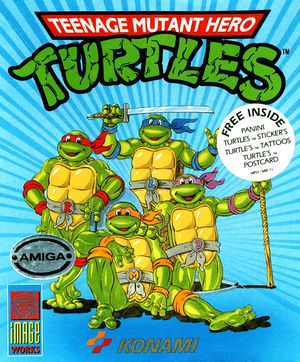