With an evil scheme on hand, the evil sorcerer Vookimedlo teams up with Bashtar to take over the jungle. While this happens, Toki and Miho (Toki's girlfriend) get into some trouble, Miho ends up snatched away by Bashtar's hand, and in an attempt to stop Bashtar, Vookimedlo puts a spell onto Toki which turns him into a chimpanzee. And now, it's up to Toki to stop the evil sorcerer, save Miho and regain his human state.

This game is known in Japan as "JuJu Densetsu".

A bootleg version of this game was released by Datsu Electron in 1990. 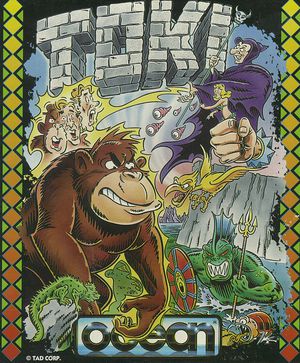 Box art for the Ocean port of Toki.