Toobin' is a 2-player, vertically scrolling arcade video game where players can race Bif and Jet, the Toobin' dudes, in their inner tubes, down 45 different rivers.

The players try to keep Jet and Bif afloat, avoiding sharp objects, gaining points, and throwing cans at obstacles. Toobin' appeals to both males and females of all ages who both find it just 'fun to play'.

Toobin' players can enjoy amusing game play and an incredible variety of rivers and environments for their long-term enjoyment.

The player races Bif or Jet against other players, or against the game, down Toobin's 45 different rivers, paddling through six classes of play, and cruising the 15 unique river environments. The player can choose almost 200 courses through the rivers, finding his own way through rapids, obstacles, riverside pests and waterfalls.

The player has to guide Bif or Jet around obstacles, go through gates and pick up treasure to accumulate points to get more inner tube patches, collect cans to throw at obstacles and to stun riverside pests, and paddle fast enough to avoid the big 'gator lurking in all the rivers.

At the finish line, players are treated to a party. Each party grows in size until the player reaches the final super party at the end of the game.

At the beginning of each game, the player has a certain number of inner-tube patches, which represent game lives. A player receives extra patches by scoring the number of points required for another patch. The number of points required changes from level to level, and is displayed in the lower left and right corners of the play-field. A player can also receive more patches by picking up patches floating in the rivers.

The player must accumulate cans to throw at obstacles and pests. All cans are the same value. The player can pick up individual cans floating in all the rivers or six-packs hidden under obstacles or in back waters (Six packs give unlimited cans). The player throws the cans by pointing Bif or Jet at the obstacle and pressing the Throw Can button.

Most of the obstacles in the river can be eliminated by hitting them with a can.

Dangerous riverside pests throw and shoot objects at Bif and Jet. The player can stun most of these objectionable characters with a can thrown in their direction. These pests include Casting fishermen, Hillbillies, Terrorists, Devils, Martians, Street punks, Pistolaros, Natives, Penguins, Bears, Dinosaurs, and Cavemen.

If a player is slow, the big 'gator comes up from behind to discourage slow play and hurry the player through the gates. A loud thumping sound warns the player of its presence. One escape from the big 'gator is to quickly paddle downstream or pass through a gate. If the gator catches Bif or Jet, one inner-tube patch is lost.

Toobin' featured a unique cabinet (as did many Atari games of the time) that featured a large marquee behind which were two rotating drums, designed to give the impression of a flowing waterfall.

Toobin' was a classic example of Atari's genius approach to abstract game design, that would typify their heyday of the mid-to-late 80s.

The default high score screen of "Cyberball 2072" features names of many Atari arcade games, including Toobin'.

Every Toobin' game in the U.S. had a special contest. A player can win a free Toobin' t-shirt just for playing the game and finding and picking up all seven characters to spell the word Toobin' (including the apostrophe). These characters are hidden in the river below obstacles and hazards. The letters collected by the player are shown at the beach party at the end of the run. For more contest details, see the game (The offer expired December 1, 1988).

The player can score points by :

If a players swishes a gate, that is, paddles through it without hitting the poles, he adds to his Score Multiplier (This is described in Score Multiplier below). For maximum points, the player should be the first through the gate and swish the gate. Each time the gate poles are hit, the point value of the gate falls. 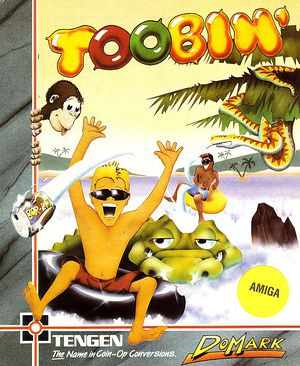 Box art for the DoMark port of Toobin'.