Lost In Translation/Turbo Out Run

Turbo Out Run is a chase-view driving arcade video game which abandons the forked-road, variable route game-play of it's illustrious older brother, opting instead for a standard set route point-to-point approach. There are several new game-play additions, however, which help to separate it from the original game and give it its own identity.

Firstly; there's the 'Turbo' of the title which is, obviously, a turbo boost that greatly increases the car's speed when engaged. It must be used sparingly, however, as overuse will cause the engine to overheat, rendering the turbo useless until such time as the engine has cooled (this is indicated by an on-screen 'overheat' meter). Weather effects are another new game-play addition, with snow, rain etc. making driving conditions very tricky.

One final new feature is the ability to upgrade your car at the end of each stage; this can be a turbo boost, new engine, better tires etc.

The catchy music that plays during the 'car upgrade' section is the same music used in the upgrade section of Sega's "Hot Rod" game and also the shop section of their 1986 shoot-em-up, "Fantasy Zone". 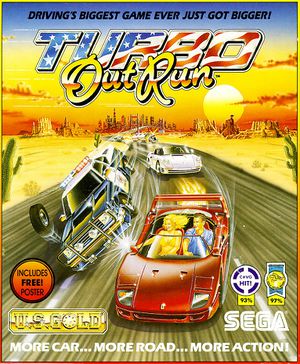 Box art for the U.S. Gold port of Turbo Out Run.