Vindicators is an arcade video game.

As team commander of the SR-88 Strategic Battle tanks, you must face the evil invading forces of the Tangent Empire. They're invading the galaxy with 14 space stations designed to defeat your team. Turrets and highly mobile armoured tanks are constantly on patrol to protect the fortifications that Tangents have built.

With limited supplies and weapons, you must make a last stand and attempt to defeat the invaders. The most powerful weapon in your arsenal is the SR-88 Battle Tank, but their fuel supply is very volatile. You must constantly replenish its fuel by picking up fuel canisters throughout the stations' many levels.

Battle stars can be found along the way. These are vital to enhancing your tank and adding weapons. Process generators can convert the battle stars into powers and weapons while in transit between levels and stations. Only with these customized tanks can the evil Tangent Empire be conquered.

As you defeat each station, demolish its control room and take the supplies the fleeing Tangents have left behind. Proceed in their mother ship to the next station for another battle.

Released in April 1988. 1988 was quite a year for Atari and tank games, since they also released "Assault" that very same year.

The Vindicators dedicated cabinet is a real favourite among some arcade game collectors. This is probably due to its unique shape, it is shaped a lot like a tank, with tank treads holding up the bottom section of the cabinet. The top half is decorated with sticker side-art that shows scenes from the game, and these same graphics generally carry over to the control panel and the front of the machine. The control panel features four tank handle controllers. 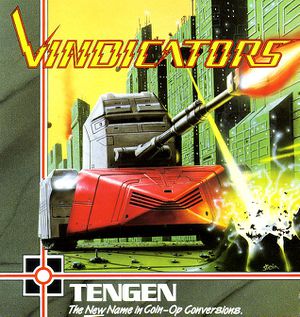 Box art for the DoMark port of Vindicators.